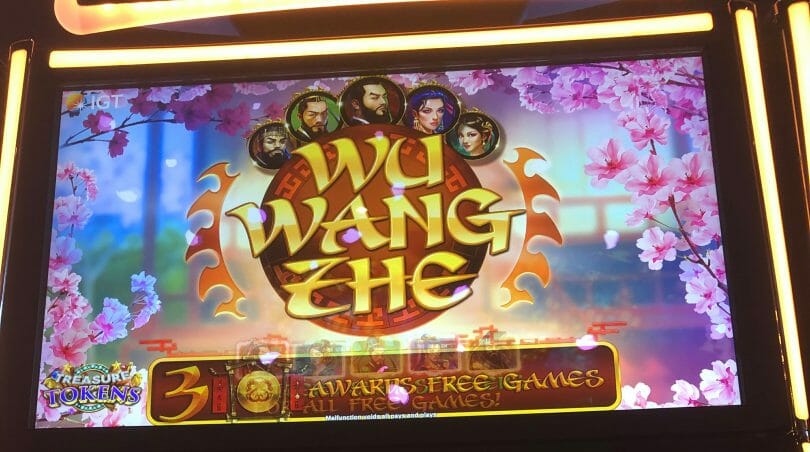 IGT has been finding various ways to explore persistent state games, and Wu Wang Zhe takes a different approach than many of the others. While collecting symbols is still the goal, you’re not getting wilds, but scatter pays, which offers a more unique experience.

Today we’ll look at the Advantage Play opportunity of Wu Wang Zhe, and how to spot it.

The game is a 5×4 reel set-up with 50 lines. Doors appear on reels 2-5 as a double-tall symbol and serve as a wild to any of the standard pay symbols.

During those three spins, should the character appear on the reels, a scatter pay occurs for each symbol present on the screen. Given each symbol pays a set amount, and you can have multiple scatter symbols active at the same time, they can add up quickly. Red is the most valuable, and yellow is the least, going from top to bottom on the left side of the screen. That is also the sequence the Treasure Tokens appear on the reels (Red in reel 1, through Yellow in reel 5).

The frequency of a Treasure Token landing seems more difficult than getting the symbols to appear for games where wild reels can be initiated, like seen on many other of IGT’s games. The tougher nature of the game may be attractive to those who like high risk, high reward style games. That said, it wasn’t hugely difficult, just not as frequent.

The Free Spins bonus can be triggered by landing three gongs, one each on reels 2, 3 and 4. 10 free spins are initiated. The Scatter pay feature is also available in the bonus. If you have a scatter active and trigger the bonus, the scatter is active for the entire bonus.

If you collect three Treasure Tokens during the bonus and activate a scatter, it, too, remains for the rest of the bonus. What you had collected in the base game carries into the bonus, so triggering a bonus with a lot of two orb characters could also be a helpful scenario.

As such, collecting a lot of Treasure Tokens in the bonus, or entering the bonus with a lot of active scatters, can be a very lucrative arrangement.

While 10 base spins are awarded, additional free spins can be collected during the bonus, up to a cap of 100 total spins.

In this case the ability to collect Treasure Tokens and the persistent state on each bet level and denomination open up the opportunities for Advantage Play.

Unlike some more straightforward games such as Scarab, you don’t know how many spins it might take to capture a Treasure Token. So having guaranteed scatter spins or having a lot of two-token characters are your best opportunities.

Check out RandomSlots‘ video on the game, which includes pay table information as well as a bonus!

Have you played Wu Wang Zhe? How did you do? Share your experiences in the comments!