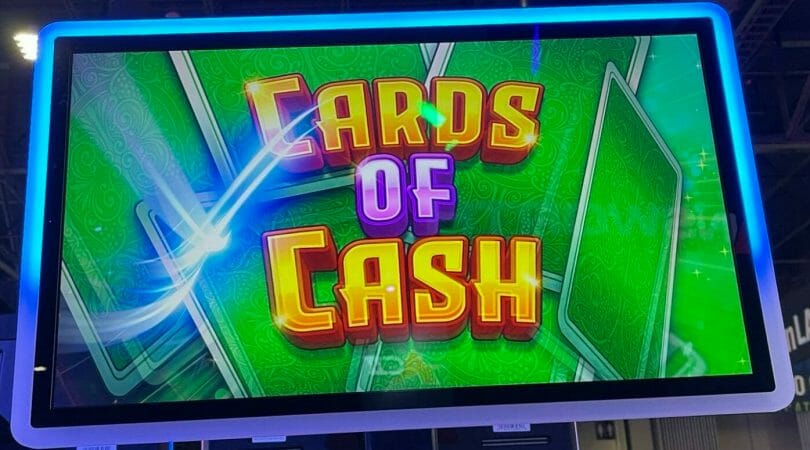 Over time, many of the games I previewed at G2E are making their way to the casino floor. One such series that I saw at Ainsworth‘s booth is the Cards of Cash series, which features three themes, each based off a classic Ainsworth game.

The core games are 50 lines/50 credits, but a 25 credit ante bet is added to enable the Cards of Cash feature, which features an offer-based bonus round that can award credit prizes or progressives. Effectively this acts like a more/better bet scenario as it’s laying on another bet to add another bonus, compared to the original games.

Once you trigger the feature, each card you earned will be dealt out as one of four card types. The card types offer a hint as to what your prize could be, either in a credit range or a progressive. You can decide to keep what was dealt, or try again for a better deal.

The game will tell you if the deal was a good set of cards relative to what’s possible, similar to other offer-based games which will tell you which is the mathematically better approach.

The base game for each of these in the series are based off a different Ainsworth game:

The nice thing for players of fans of those games is the base games and bonuses will play as you remember them – you’re just adding an additional layer on top with the Cards of Cash feature. So if you like the Mustang Money bonus, you’ll certainly enjoy Wings of Fortune, which brings you that same bonus.

Ainsworth‘s YouTube channel has a video with their team covering each version of the game. Here’s their Queen’s Legacy video:

Here is a video covering the Enchanted Fox theme:

And finally, here’s a video for the Wings of Fortune version: