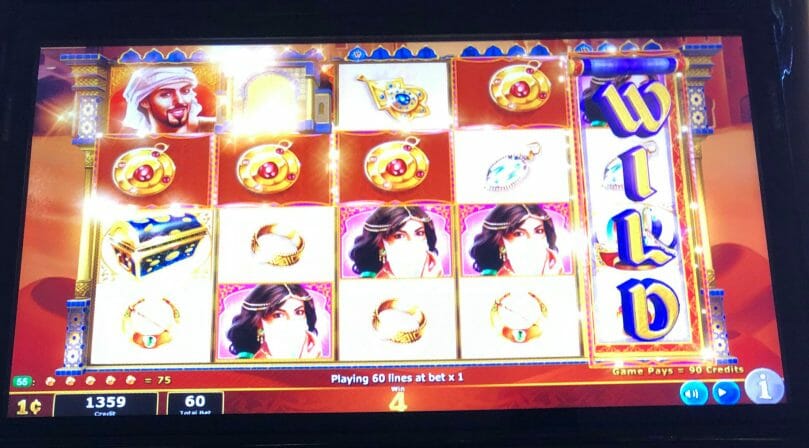 Back in July when I reviewed Golden Jungle, I mentioned it was a clone of Aladdin’s Fortune 3D. I recently came across the latter game and took a quick look at it and how it differs from Golden Jungle (here’s a hint: the symbols pop out at you).

The game has 60 lines and 60 cent bets, so 1 credit per line on the 5×4 reel panel. Golden Jungle as I saw it was configured to be a multi-denomination machine; Aladdin’s Fortune was not, which may be one way these two games are differentiated. There’s still five bet levels, with persistent state reels on each level, so cashing out won’t lose progress.

On the reels there’s magic lamps, and each time one lands one of the four domes up top illunimate, each housing a letter in the word WILD. When they fully light up, that spin, and the three after that, will see that reel be wild. Multiple reels can be wild at any given time, and the generous line count means that can be very helpful for pays when it happens.

Triggering three door symbols will launch a volatility choice for the free spins bonus, which is identical to Golden Jungle as well:

The bonus structure is somewhat similar to Golden Egypt, which also has the Wild Stays mechanic, but the games are different enough to have their own merit.

If a player has left wild reels on the board, that’s the most obvious advantage. More reels, and the more to the left they are, the more advantageous it is. Since the wilds stay for four spins, that can be a long time to either add more wild reels,

In the absence of that, if there’s a lot of letters lit up at the top, and again the more to the left they are, the better the play here. The first three reels will of course carry the most weight, with less on reel 4 and not much value at all (unless combined with other wild reels) on reel 5.

Check out TheBigPayback‘s video on the game, which includes all the features of the game, including the free spins bonus: