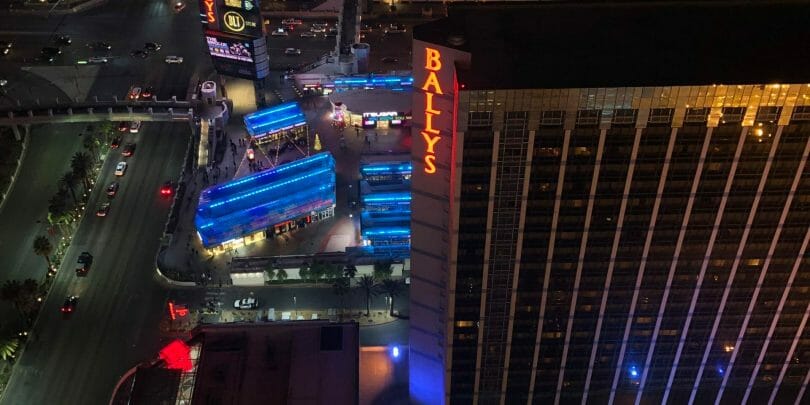 Bally’s Las Vegas, like its Atlantic City counterpart (which until recently was under the same ownership – Caesars – but has since been sold), has used the slogan “Center of the Action” because of its position in the center of everything, in this case the Las Vegas Strip.

Bally’s is a bit weird in layout and location, however, which can have its pros and cons. I stayed at Bally’s before they completed their latest room renovations, but since they match the design of the original room updates, the review doesn’t change all that much. Let’s dive in to what Bally’s Las Vegas has to offer.

The floor is somewhat narrow but lengthy as you move from the entrance towards the back of the building. There’s around 1200 machines, including your normal mix of slot machines and video poker. There’s a decent balance of old and new machines, like many Vegas casinos, as well as lower and higher denomination.

Video Poker pay tables are standard for Caesars Rewards properties, which is to say, not very good at all. You can find some mediocre Jacks or Better pay tables at high denomination, and that’s just about it really. There are tons of better options in Vegas and the surrounding areas if that’s your preference.

There’s a solid table pit here with around 65 tables; minimums are about average for the strip, so it won’t be the cheapest tables but won’t be the most expensive either. Your standard table game options are in play here, along with a few carnival games like Let It Ride.

They’ve been remodeled in two phases that look nearly identical but were done a few years apart. The Jubilee rooms, which are closer to the strip, were done first, and the Resort rooms more recently.

I got to stay in what they dub the Executive Suite on a previous visit in the Resort Tower pre-renovation. The layout of the room hasn’t changed – there’s still a soaking tub dead center in the bathroom area, out in the open near the bed, which was a pretty unique and enjoyable setup while staying there.

They have some interesting room layout options relative to the standard which for those looking for something a bit different, whether that tub or more space, could make Bally’s a nice option.

We had originally had a Jubilee room booked at that time, but we were told there may be a risk of a lot of noise and opted to stay in the other tower instead, which was quite quiet.

Bally’s is part of a string of casinos on that side of the strip that is part of Caesars Rewards, and so the earnings, redemption and bonus tier credit rules that govern Bally’s governs all of those properties.

It’s helpful to note all play within Las Vegas counts towards the daily bonuses, so if you bounce around their properties it all counts. However, you only see your counts within each casino, so you’ll need to keep track of where you start and finish each day.

Bally’s is set back from the strip quite a ways, with shops in front of it, which makes access to the casino and property a bit of a time suck. When we stayed in the Resort tower the elevators were in the back of the casino, so you had to cross that long casino too and then the hallways themselves were a lengthy walk if you were at the end.

The monorail is a bit of a hike from the back of the casino too – despite it not being a necessarily big property because of its long/narrow space it does seem to take awhile to get from Point A to Point B. So expect that if you plan on staying there.

It is connected to Paris via a hallway of shops and restaurants, and the parking garage they share is closer to the Bally’s side. The connection is nice in that you can easily access both properties’ amenities without having to leave the indoors, helpful in bad weather or very hot/cold times.

Bally’s has a food court downstairs heading towards the monorail, which has a few grab and go options. They also have a couple of casual restaurants, like Buca di Beppo, and a couple of upscale restaurants such as the standard steak option, in this case BLT Steak.

There’s additional options in that connector between Bally’s and Paris, so while Bally’s itself has a handful of options, there’s even more if you’re willing to walk a bit.

You can book rooms at Bally’s Las Vegas through vegas.com, which offers a Best Price Guarantee. If you find a lower price while booking or within 24 hours, contact them and they’ll match it! Vegas.com routinely runs promotions on hotel rooms as well, making them a good place to check.