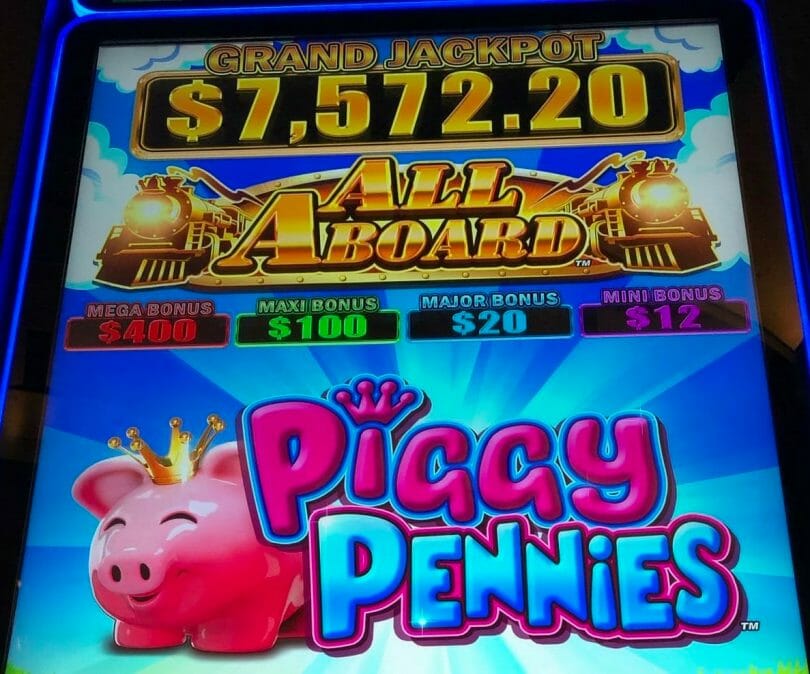 The link-like games keep on coming, and Konami has certainly introduced its share, whether it be Thunder Arrow or Money Galaxy. But with their latest effort, the train-themed All Aboard series, they may have hit upon one that captures the attention of the slot player.

Piggy Pennies is the first theme, and on the surface it seems to check all the main theme boxes. Piggies, which for some reason has been particularly popular in recent years, and the All Aboard train-themed feature, which too has had its history of popularity on slot themes.

The bets are accessible, starting at 50 cents for penny denomination, and the game, like many link-style games, is multi-denom allowing for bets of many sizes. The game structure shifts slightly at higher denominations vs. lower (in particular the number of lines get lower as the denomination gets higher, also like other link style games), but the features work the same.

The All Aboard feature, which presumably will be picked up by other games, is the link-like feature in this case, and like with Konami’s other efforts in this arena has a unique aspect of the chance of winning prizes multiple times.

It starts by landing a minimum of six trains, which triggers the feature. The spaces with trains convert to coins with amounts on them. The standard three spins then become available to land at least one more train. If you do, all the prizes are collected (hence “All Aboard”) and the new train symbols convert to coins, and you reset back to three spins.

This continues until you either run out of spins, or get the 15th reel space with a train, in which you win the Grand Jackpot. The chances of the Grand Jackpot win grows with higher bets, like any game of this structure.

The coins can reveal any of the other four jackpots, which on this game are flat bonus jackpots and shift based on denomination and line bet wager, so they are proportional, a nice touch, making them strike with the same frequency regardless of wager (just the bigger bets will allow for bigger prizes).

If you trigger the bonus, but never get another train to collect it, you win the value of the coins that revealed upon the trigger, so you don’t ever complete the bonus empty handed.

Given the repeat pay nature of this bonus, it’s a harder feature to hit, but the potential is higher, akin to other Konami games built in a link-like model, where the potential is a bit more open ended.

Getting coins on the middle three reels will trigger the free games feature, which gives you five spins.

The middle three reels become one giant symbol, but still act as nine symbol positions for a pay evaluation. So a piggy wild or matching symbol instantly becomes at least four of a kind. The coin is removed from the big symbol reel, and the piggy wild can only appear on that reel.

Unlike the Lightning Link bonus that has the big symbol, Piggy Pennies lets the symbols straddle, so you could have a piece of two different symbols on the big middle reel.

The bonus can retrigger with a coin on reels 1 and 5, which appear there only for the bonus (the bonus trigger can only happen on 2-3-4). The All Aboard feature can be triggered in the free spins, especially with a train symbol on the giant middle reel.

Finally, you’re playing with the same line count (and line multiplier) in the bonus as you are wagering in the base game, so pays are evaluated similarly.

RandomSlots has a video featuring a good bonus and the pay tables:

Here’s TheBigPayback with a video on the game that includes all the features:

Slot Queen played All Aboard, starting at 3:33 in this video: