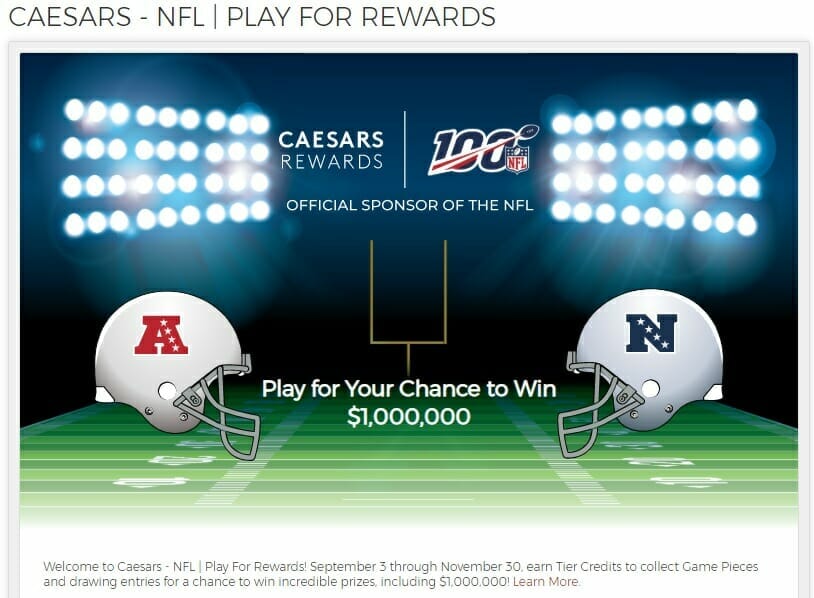 In today’s post I’ll explore how it works and what kinds of bonuses you can expect.

Pieces are Easy to Earn

For every 50 tier credits you earn, you receive one game piece and one entry into the final drawing. Bonus tier credits don’t count towards the total, nor do certain types of earnings, such as playing live poker or keno. A single player can earn a maximum of 20,000 game pieces, which is 1 million tier credits in 3 months. That’d be a signficant feat, but such is the limit. You can also receive 5 game pieces, and 5 entries, per mailed submission by using this form.

As you collect game pieces, you aim to complete sets. Completing sets earnings you tier credits:

As you can see, even completing one set, and getting 100 tier credits, isn’t exactly easy – it’s reported that Caesars Rewards has 50 million registered accounts, and while not all would be playing during the promotion, Even if 1 million players are playing that’s just 3% of the total being able to complete one set.

There are also bonus prizes, which include NFL gift cards, NFL tickets, draft tickets and more, but also more commonly include tier credits:

As you can see, there’s more prizes there in total than completing a set, although the prizes are smaller, and you could theoretically win more than one bonus prize.

The final drawing is for 100 NFL Gift Cards and one grand prize of tickets to the Super Bowl.

Unlike Quest for Rewards, there is no guaranteed action that can bring you tier credits, so this is more of an added bonus and a nice surprise that can help you achieve your next tier, vs. something that offers a guaranteed boost based on following set actions, such as gambling a certain amount or enough spend in a certain category.

That said, if you’re going to be going to Caesars properties, you should register, and perhaps you’ll win something else.