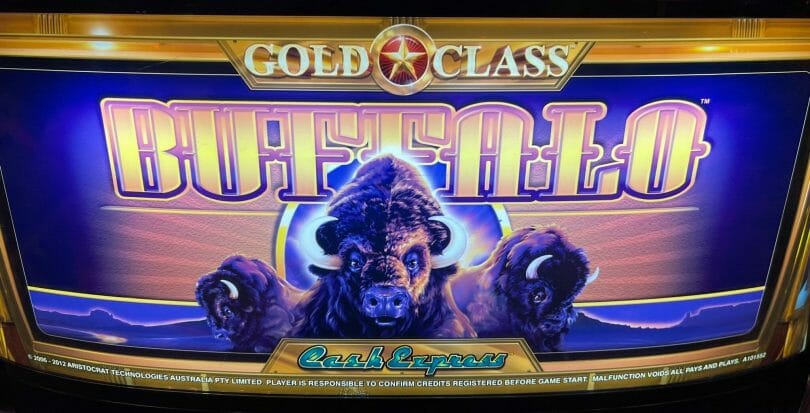 In a recent post I talked about Cash Express Luxury Line, and how the Cash Express theme evolved from a game add-on to something much more baked into the game.

I had the chance recently to sit down at Cash Express Gold Class Buffalo version, and was able to revisit a classic add-on to the Buffalo theme that players clearly recall with fondness, or there would not have been a modern revival.

The Cash Express Gold Class add-on features a number of specific features and bonuses that offer additional action. The features can happen randomly, above and beyond the standard bonuses that you’d find on Buffalo.

The most basic is a multiplier wheel that can trigger on the base game, and can see big multipliers potentially come to the surface.

The Gold Class feature is a 20 free spin bonus of its own that sees a special set of reels come to the surface. You start with the lowest level train, and work your way up by getting upgrade symbols.

Upgrade symbols increase pays and improve the progressive you could be playing for.

During my most recent playing, I won a whole 56 cents on the one train I managed to land. So it’s certainly not a guarantee of big wins, although it can certainly rack up a lot of prize given the up to 100 carriages possible.

If you upgrade all the way to the top train, the train symbols replace with jackpot ones, and lining up three in a row wins the top Gold Class jackpot.

There is also a random progressive feature, the Cash Express Link Feature, where you have five reels with various numbers spinning by. Based on the score you achieve, you win the progressive. It’s structured of course to give the Mini a lot, but you can win as much as the Grand jackpot on this feature with a high enough score:

In my one try I got the mini, but it actually proved to be the best win I had on the game that session, which of course isn’t saying much.

The add-on could be attached to a variety of different games, and they were designed to be banked so you could have the progressives growing from play on multiple machines, to keep things interesting and active.

If you wanted to play the regular game, you could generally find the game elsewhere on the floor, so this, like the Konami games, was built to be played as a complete set.

But this certainly added activity overall, for those who wanted more regular features and bonuses. To that end, it worked, and is a fun one to seek out where you can still find them.

This video from RandomLiving shows all the core features of the game:

Here’s a video from Scotty Too Slotty with a strong run on this game: