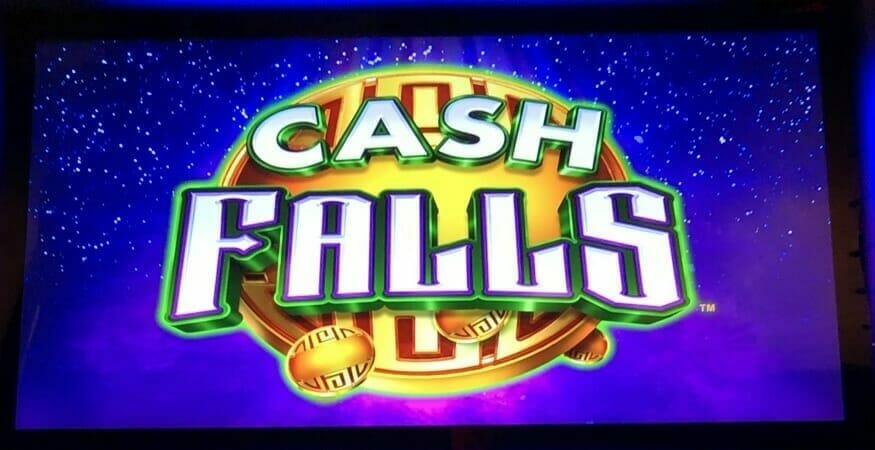 The Free Games bonus is basically just a ball collection bonanza, while the base game is like a never-ending link hold and respin on each reel.

Game: Cash Falls
Manufacturer: Scientific Games
Advantage Play Potential: Medium
What Makes it Special: Collect balls with numbers/jackpots and they hold on the reels for three spins. Fill the entire reel with balls and you win all of the values displayed on the balls in that reel.

Cash Falls is an interesting concept from Scientific Games where it takes the link model to the most extreme take – much of what you win on the game comes from those balls with numbers and jackpots. The Free Games bonus is basically just a ball collection bonanza, while the base game is like a never-ending link hold and respin on each reel.

That means persistent state reels, and an opportunity for observant players to pick up a few bucks at a time. Let’s dive in to the game and look at what makes it tick.

Cash Falls works on 50 credit increments, and is an all ways pays game. With a 4-4-6-6-8 reel set that works out to 4,608 potential ways to pay, but the reality is you will virtually never achieve that because of persistence related to one core way you make money, which is the Cash Falls feature.

The game is set up as a multi-denomination game, and each bet level in each denomination has its own set of persistent state reels.

Fans of Link games know the balls with numbers/jackpots by now. In this case they’re in stacks of 1-3 on the base reels and when they land, lock in place for the traditional three spins. If another one lands, the counter resets.

The counter is visualized by the dots under reels with locked balls, and there’s a border around ones that will stick around next spin, in case you’re approaching a machine and wondering where things are in the cycle. The border turns blue when only one ball remains, and it will suspense spin on the last chance for that last space before they unlock.

If at any point you fill the entire reel with balls, you win the value of each ball on the reel. The balls unlock and the reel is cleared out to reset for the next spin.

The balls are persistent per denomination, and per bet level, so if you cash out, or change bet levels, what was there after the last spin sticks around.

Finally, the balls do block the other symbols, including the Bonus symbols, so if they land behind the ball, they don’t count. This is why while you have thousands of ways to potentially win, with five reels on various parts of a hold and respin cycle, it’s unlikely you’ll have anything close to that on any particular spin.

The line pays aren’t even that much to write home about – 2x for a five of a kind of a premium symbol. There’s only seven pay symbols outside the wilds, balls and bonus symbols, however, so it’s not necessarily hard to get some small pays outside the balls when the board is relatively clear.

Jackpots are also won through the Cash Falls Feature, so that feature is really doing most of the work. What can appear on each reel of the Cash Falls balls depends on bet level, although it mostly comes down to when you can win the Minor jackpot:

The base game is the only place where you can win any of the jackpots, an interesting twist on the format. The distribution of prizes on the balls does change with bet level, which takes into account the larger progressives as well.

Three or more bonus symbols will give you the free games feature. The number of spins you get are based on the number of symbols you land:

The regular symbols are basically dimmed out – this is all about ball collection for hold and respin, for however many spins you won from the trigger.

The values on the balls shift during the Free Games vs. the base games:

Note that you cannot win the larger progressives in the Free Games. The chances of winning a jackpot changes with the bet multiplier, as always.

If you complete a reel, you are awarded a multiplier for that reel that multiplies the values on that wheel. This can help make up for the lack of big progressives in the bonus.

When the bonus is complete you will win all the balls you have collected, whether you’ve filled a given reel or not, so unlike the base game everything you’ve collected is yours.

During my time on the game I got a couple of Free Games bonus, both with three symbol triggers, both with no full reels, and both coming out right around 30x, so my guess is that’s what a standard bonus looks like, with the chance to overperform on times when you get a full reel and/or the additional spins to see through to get more balls. Still, a 30x bonus can be quite helpful on a game like this.

You’ve basically got five hold and respin games going concurrently. If you have multiple reels that are pretty far along in being filled, there is certainly the chance of filling up a reel. During my sessions I only filled reels 1 and 2 – I never saw a completion of reels 3, 4 or 5.

With more spaces, and potentially higher values as noted in the chart, they are certainly going to be less likely to deliver. So a more sure thing will be seeing reels 1-2 farther along, and you might actually want to aim for when they have more spins – you have to wager more potentially for it to pay off, but you have more chances for it to pay off.

Reels 3-5 are going to be a bit more of a swing for the fences to try to close them out, by comparison.

One thing to be careful about with a game like this is by having five independent journeys with the hold and respin feature, there is almost never going to be a completely clear spin on a given bet level, let alone five. It is designed to get new cycles started on some reels while you are trying to close out others, in an effort to keep the coin-in going.

It is perfectly OK to leave a small number behind, especially on the latter reels, because it will take some number of wagers to see it through, especially if it keeps dropping one or two at a time.

This plays to me like a pretty low volatility machine overall, given the size of the prizes, the frequency reels 1-2 pay off, the small line hits, the way the bonus plays. So this isn’t going to be a machine that will get you rich quickly in most cases, but you could pick up some money.

Also important to remember is 5 bet levels and 4 denominations in the machines I’ve seen so far, which is 20 reel states to check, although the dime denomination can reach into the tens of dollars accordingly.

Slotaholic played the game at Coushatta, which included a Free Games feature with a full reel:

NG Slot gave the game a go a few months ago, which starts at 8:32, and features multiple bonuses, including a 4 symbol trigger:

TheBigPayback played a different theme of the game, but otherwise looks identical. It also features multiple bonuses, including filled reels and jackpots: