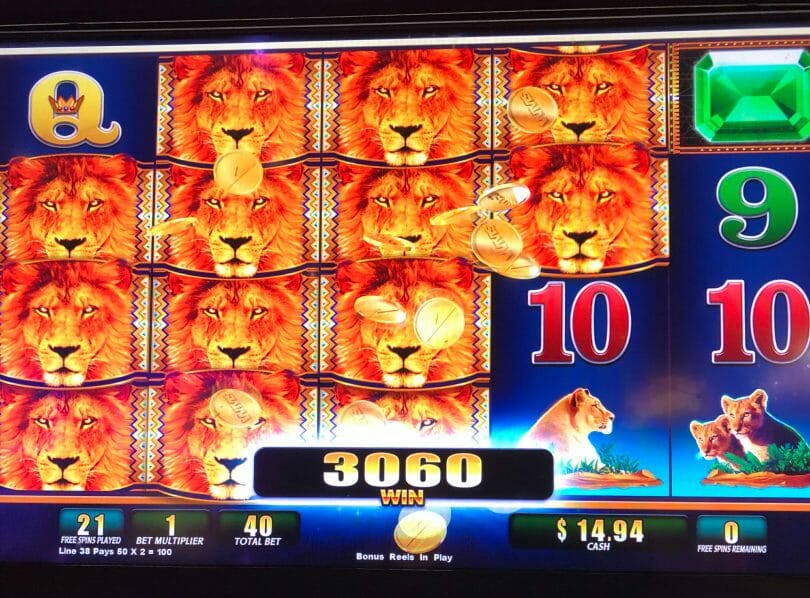 In an earlier post on slot volatility, I noted Stacked Symbols could be a sign of higher volatility… or lower volatility. The reason this feature is so widely used, and so hard to pin down, as when it’s paired with other traits, it can amplify the volatility or rein it in.

So in this post I’ll review some of the ways stacked symbols are employed, and how paired with other slot mechanics can either raise the volatility or reduce it. These are general statements – there’s various ways to play with the math and make something more volatile less so, and vice versa, so keep that in mind.

I talked about the concept of all ways pays slots, and how the way a pay is evaluated can impact the game when clumped or stacked symbols come into play, in a previous post. But in summary, if a symbol is stacked and lands in an all ways pays game, the multiplier can build up quickly.

On games like Aristocrat’s Gold Stacks series, it’s not impossible for a full screen to pay 1024 times (as the games are 5×4 reel sets). Even if a symbol only pays a few cents on a small bet, 1024x that few cents adds up quickly.

With a restricted number of lines, stacked symbols on a lines game can only be paid a set number of times. This caps what the payout can be at the line count, vs. all ways pays where theoretically a 5×3 reel set could pay the 5-of-a-kind pay 243 times, for instance.

Cheshire Cat’s traits of all the symbols being stacked, and the odds of a full screen being high but paying less, delivers another trait of a less volatile game.

The old school High 5 Games with stacked symbols, distributed by IGT, does this as well – you get frequent, solid hits from stacked symbols, but nothing into the stratosphere. But the lower pays allow them to pop up more often, and that is what brings down the volatility.

Of course, when the pays amp up, that’s when you’ll see some chances at some big wins, less often. An example of this is Great Zeus, part of the Zeus series of games by WMS, which emphasizes a premium symbol, Zeus, for outsized pays. Lining up Zeus will pay you a lot, but the flip side is that it’s not as easy to trigger, making the game more volatile.

The bonus also emphasizes Zeus, with the goal of trying to collect additional Zeus symbols throughout the bonus and then lining them up. So similarly the bonus is designed to amp up the volatility, whereas Cheshire Cat has the same layouts but gives you the chance to get more reels and wild reels, bringing even more chances to get full screens on multiple reel sets.

There are games that will either select a symbol to be the stacked symbol for that spin, or will have a mystery symbol reveal. In both cases these features will amp up the volatility.

In the case of a game that selects a symbol, like Robin Hood and the Golden Arrow by WMS, a lower paying symbol could yield lower pays whereas wilds could make for a giant win on a single spin. As you can see in the picture above, I got a 100x win with just four wild symbols on the screen, including a single 5x. If there were more present the win could have been gigantic; in the bonus, that 5x would be 10x as well.

In the case of the latter, such as Bier Haus 200, if you get the right symbol, or a full screen of mystery reveals, it could lead to big wins as well, but they could also prove to be blockers if the wrong symbol is revealed.

Games that factor in regular stacks of wilds tend to pay less since they can match with anything. So they tend to work a bit more like Cheshire Cat for that reason (which also has stacked wilds among the opportunities). Full screens are more possible, and therefore the pays reflect it.

This cascades over to games like Golden Egypt, where one or more wild reels can happen. Even in the absence of other stacked symbols, the game tends to lean towards a less volatile model.

The exception would be games like Robin Hood and the Golden Arrow, where the stacked wilds only occur occasionally (when they are selected as the symbol for that spin), in which the pays are maintained towards a higher volatility model.

Do you have a favorite stacked symbols game? Share in the comments!