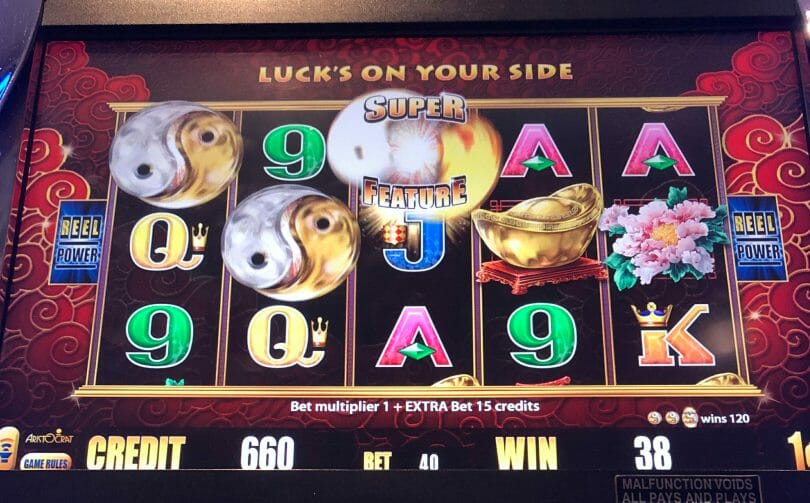 In a previous write-up, I identified all ways pays as a sign of slot volatility. In this format, you can have 243, 1024 or even more ways to win, vastly more than 30 or 50 lines. So theoretically, if playing more lines reduce volatility, you’d think that all ways pays

In today’s post I’ll take a deeper dive into why that is, and show you a few examples of this volatility in action.

What is All Ways Pays?

Most modern video reel slots have a a 5×3 or 5×4 reel layout. So you effectively have 5 reels, with 3 or 4 symbols in each column. All ways pays means that instead of having to have symbols line up on specific lines, as long as the symbols appear at least once on each of the first few reels, it will pay you, and if you have one on each reel, that pays as a five of a kind.

For some players, this can be easier to understand than trying to figure out what’s a line and what isn’t, so that can be appealing in some ways. With some video reels games hitting 50 or even 75 lines, it can get trickier to track, so all ways pays makes it simple – if the symbols appear on enough reels, you get paid.

How it Becomes More Volatile

All Ways Pays gets more volatile because symbols can be clustered, with 2 or more stacked on top of each other. The pays are then evaluated by multiplying the win based on the number on each reel. The way the reel stacks are arranged, it’s tougher to get a bunch of symbols together, but if you do, it can be very big.

Multipliers Can Push it Further

The Buffalo series is another great example of stacked symbols, as when you get a lot of buffalo on the screen it can pay really well. The series takes it a step further by, while in the bonus, allowing multipliers to crop up on every wild symbol.

Buffalo Gold is a sequel that pushes things just a step further by allowing some of the non-poker symbols to change to buffalo when a certain number of gold heads are collected, upping the chances of a heavy buffalo hit.

As you can imagine, for games to have this potential, there’s a lot of dead spins. In the case of Buffalo Gold, you pay a 20 cent premium on every base game spin just for the chance to get a gold bonus, rack up the gold heads, and get wave after wave of buffalo heads… assuming you get enough coins to retrigger.

Other All Ways Pays Examples

One of my favorite all All Ways Pays games is actually getting very hard to find. It’s part of WMS’ Power Spins series, and there’s still one left at Paris (I arrived in Vegas in May to three of them being present, and two of the three were taken out while I was there. I’m hoping the last one survives until my next visit in a few months.)

I’ll review the game type at some point as it’s fun, albeit a bit complex, but the thing to understand is the Power Spins, which sit in the bottom middle, are earned while spinning and can be played at any time. The big one, in my opinion, is the water power spin, because you earn one or more wild reels. On an all ways pays game, that’s a quick way to amp up the multiplier.

Also hard to find, and even more volatile, is WMS’ Awesome Reels series. It’s a massive 6×4, which means that you’ve got 24 positions to line up stacked symbols, vs. the normal 15 on a 5×3 game. They added in respins, bursts, and multipliers to fully amp up the volatility. But when things didn’t line up, it could get tough quickly.

Big Wins… or It’s a Struggle

And that’s the appeal of all ways pays games – they have massive potential based on how the wins are evaluated with the multipliers based on how many are stacked in each reel. But the flip side is there’s more dead spins (or “winning” spins when you just get baby pays that don’t give you back your bet), and it’s harder to line things up in just the right way to pay. But when it happens, you get an astronomical pay.

So how do you counteract it? You can bet down, like the 5 Treasures example I gave in a previous post. You can plan for more money in to give you more spins to make something happen. Or you can just keep on a strict diet betting on these and try to avoid the allure of going overboard without a big win.

I used to have a rule where I’d give a machine 50x my bet size to make something happen. Now that varies much more widely due to the increasing prevalence of these type of games.

I’ll give it a small amount and see if I can make lightning strike quickly, bet down to have more patience, or put 100x in to give it more time. You can get 100x or more very handily on these games when things stack up correctly.

I like sometimes playing one gold symbol on games like Dancing Drums or 5 Treasures, and amping up the line pays so that the one gold symbol can pay well. The nice thing about many of these games is you can tinker with the betting options and find a way to play at a level you’re comfortable.