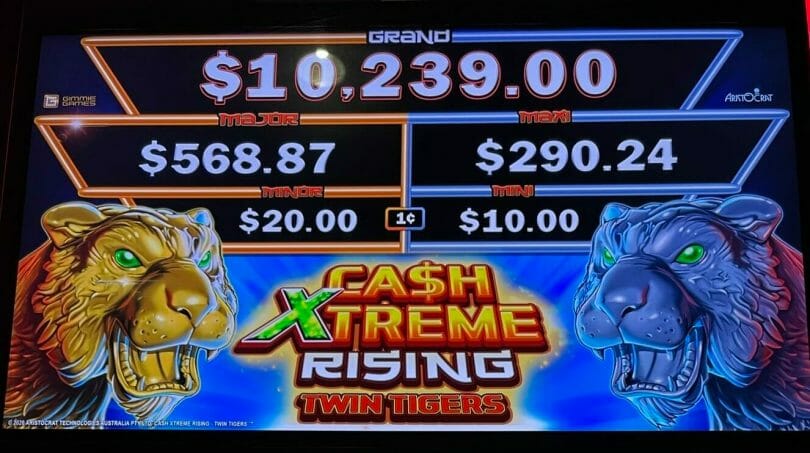 As I reported during G2E, slot manufacturers love to liberally borrow concepts from each other. Generally, Aristocrat has been often the one that is copied by others, but this time it gets a little more murky.

I recently had the opportunity to try Cash Xtreme Rising, which a friend of mine had described as a sequel to Mighty Cash (even though there is a previous game series called Cash Xtreme by the same studio).

I can see why – the game was developed by Gimmie Games, the same Aristocrat division that has been responsible for the various Mighty Cash games out there. It also has the dragon/tiger themes, just like the original wave of Mighty Cash games they released. There’s five jackpots, a mix of progressives and flat jackpots.

But there are key differences here (which probably explains why it’s not called Mighty Cash) and that’s where the borrowing is more pronounced.

First off though, it’s a 60 credit increment on pennies, with 30 lines. Like many games of this style, the number of lines (and therefore overall wager) change around with denomination.

There are stacked wilds on the reels which yield regular, not great line hits. Honestly the game has the pronounced feel of one that has line hits because they’re expected, but most of the pays are in the features.

The game features the ability to get free spins with three or more bonus symbols. Like Mighty Cash before it, three bonus symbols yields 8 free games. There’s the tell that can come out before a big win, hold and spin feature or free games.

But the hold and spin is where it’s at (called the Cash Xtreme Rising feature here), and it can be triggered during a base game spin or during the free games. Six or more orbs gets you started.

First off, you get the initial orbs twice, onto two different reel sets, akin to Mighty Cash Double Up. But it follows the more traditional link model of three spins to land another orb on each reel set.

If an orb lands on a reel set, that reel set’s counter resets to three orbs. If one reel set runs out, but the other reel set as spins, the reel sets with spins continues to play out.

Another addition is orbs with arrows. When one lands, it unlocks another row, which has a similar feel to the Fire Link series as any orbs that landed in that row are automatically awarded as well.

One more aspect that’s borrowed from other link style games – if both rows are unlocked, and all spaces are filled, the Grand jackpot is awarded, another more traditional link style outcome of filling the grid (most Mighty Cashes award a multiplier, credit prize or both for doing so).

The potential is pretty substantial given the chance for up to 50 prizes (or 48 presuming the Grand remains very hard to get, which would be likely). Among a couple of sessions on the game, one the bonuses were flowing pretty regularly, and the other took some time before they came out, and my sense is this is a reasonably volatile game.

You can see an example of a 70x bonus in the hold and spin, so to be able to offer those types of pays in the bonus the base game is going to be tougher, which going back to the anemic line hits makes total sense.

Overall though it’s a fun variation on a common theme, and link fans, as well as Mighty Cash fans, will have plenty to enjoy here.

Here’s a video from TheBigPayback, betting across the bet panel at $1 denomination, and featuring a handpay:

Diana Evoni had a good run on the game, triggering the free games and then retriggering multiple times, while getting the Cash Xtreme Rising feature as well: