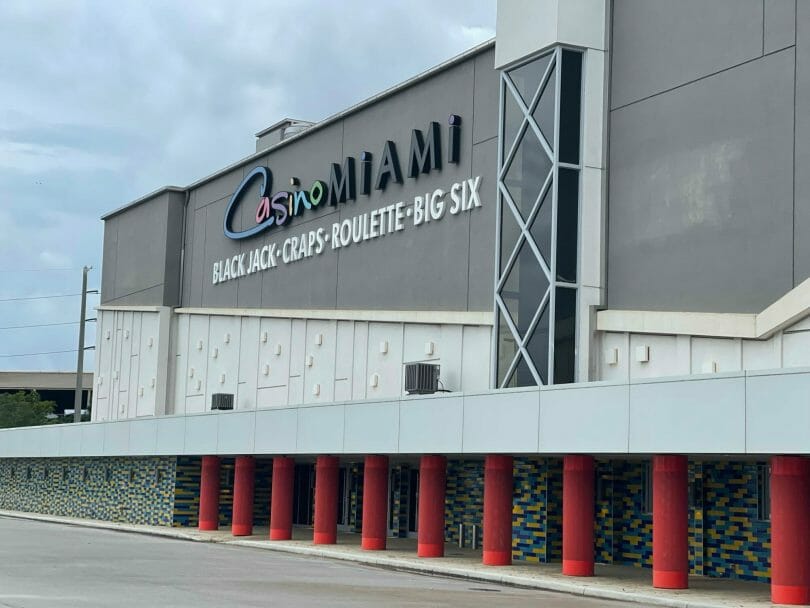 As part of a recent trip to South Florida I took a visit to Casino Miami. The property rebranded in recent years after having a more heavy focus on Jai Alai.

I aimed to stop in in part because the casino offered a minimum of $50 for new players. But they also dangled the carrot of a $150 bump up and a tier match for Caesars Diamond members on their website.

Given the property’s history, I was not expecting anything spectacular – they are not a full resort, so no hotel or anything like that. And sure enough, it was a pretty plain establishment. If you’re a fan of the Hard Rock style of things, this is not the place.

But there were two early disappointments. One was that there were big spaces for food places like a Cafe that were blocked off and empty. I didn’t see any food options at all, and their website doesn’t offer any information to that end either.

For me, that wasn’t necessarily an issue, because many of the games they had I enjoyed. This further separates Casino Miami from some of their more well-funded competition such as the Hard Rock Hollywood.

That said, some of the machines were very popular games in South Florida that all the casinos have, so at least in part it feels purposeful.

There’s about 1000 slots on the floor. They didn’t have live dealer table games, but did have some e-table games like craps and roulette for those interested in playing those games.

The place was a bit deceiving; we entered into a space with a small number of machines, and then turned the corner after we got further in to some bigger spaces of games.

I went with two friends on a Sunday; each of us got the $50 welcome offer. One came out a bit above the $50 after playing through it, and the other two of us got half our money back.

They had a sign posted near the players club that their most recent quarter of payback was 92.07%. Rocky Gap in Maryland had a similar such sign, and I appreciate when casinos show information so visibly. even if it perhaps is a regulation to do so.

However, their few bartop video poker machines had very poor pay table payouts, and because they also had electronic tables, I wonder if the tables were pulling up the overall average, and the slots, like video poker, were paying in a lower range.

A single session is not enough to form any definitive conclusions, but I didn’t see any really big winning going on around us either, despite it being a little bit busy.

I don’t expect we’ll be back anytime soon; there’s better options in the distance and this facility feels dated with the game line-up, barebones everything and the lack of food to make a visit more than an hour or two worthwhile.