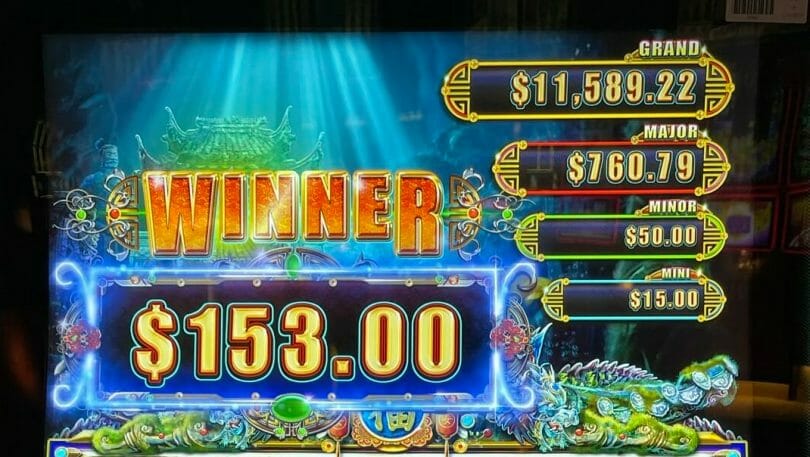 One common element is certain wilds on the base game and free spins get upgraded. On Fire Gem, it expands to become a full wild reel, but on Aqua Gem it introduces a multiplier. This makes it harder to line things up, but rewards with better payouts when it does. This generally makes this version more volatile, especially since it’s not necessarily the easiest to get bonuses.

The second element is the hold and spin bonus round features the ability to upgrade prizes shown on screen. Fire Gem, if the upgrade symbol is adjacent to a clump of symbols, it upgrades all the symbols in that clump.

On Aqua Gem, each spin some symbols can show a green/aqua background; if an upgrade symbol appears it will upgrade each prize with that background, based on the value spun on a wheel (the same wheel element appears on Fire Gem for its upgrades).

If the upgrade symbol and the upgraded space is in the unlocked sections, your counter resets, which gives you more ways to get three more spins. It does seem a bit difficult to get upgrades but they seem more substantial when they happen, just like with the wilds.

So Aqua Gem, of the two, is the one that’s going to see bigger swings, but have the better chance for a big win.

Indeed, that’s what I found – so far my biggest win on either version has been this more than 300x bonus that I got on Aqua Gem back in November. It certianly didn’t hurt that I got two minors in the process!

Here’s a session from RandomSlots, with a pay table look:

TheBigPayback had a great session on the game:

VegasLowRoller tried both versions in this video: