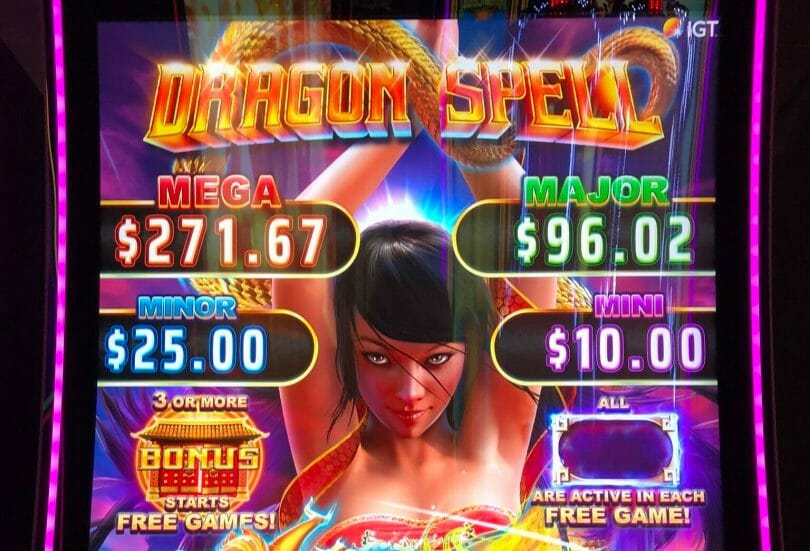 Particular symbols lock gold borders, and at a certain point an 8-spin cycle is initiated, but it’s a bit more loosely structured, and how it finishes off the cycle is different, which means a rethink of what to expect with this one.

Game: Dragon Spell
Manufacturer: IGT
Advantage Play Potential: Medium
What Makes it Special: Gold borders collect and stay until an 8-spin cycle is triggered and completed. Prizes that land in the gold bordered spaces on the final spin are awarded.

IGT introduced the collect borders/spin cycle model with their popular Scarab game, and they’ve continued to tinker with the concept on sequels and other game formats such as Star Goddess.

Dragon Spell has some similar traits – particular symbols lock gold borders, and at a certain point an 8-spin cycle is initiated, but it’s a bit more loosely structured, and how it finishes off the cycle is different, which means a rethink of what to expect with this one.

Dragon Spell is a 5×5 reel set with 40 lines evaluated and 60 credit bet increments. The game features a persistent state scenario for each bet level, and in this case its for the gold borders.

No borders appear at the start for a new spin cycle. When dragon symbols appear, gold borders are added and locked to the space on the reel. However, if a dragon symbol with an orb appears for the first time, while a gold border will lock into place, an 8 spin countdown is activated.

For the next eight spins, dragon symbols, with or without an orb, continue to lock gold frames on the spaces, although the countdown continues forward.

On the final spin of the cycle, if a credit amount, seen with green backgrounds, lands where a gold frame exists, that prize is awarded. On a 60 credit bet those prizes range from 50-500 credits, or could also be a jackpot, which can be won at any bet level. Jackpots and credit prizes grow with your bet.

After the final spin of the cycle, all the frames unlock, and you start with a clean reel set beginning with that next spin.

The dragon symbols are taken off the reels so you just have the gold frames given for the bonus, and the credit prizes are always present anyway so you just start winning them every spin if they line up. So the bonus clearly has some potential depending on how many/often you line the frames and credit prizes up. You can also win progressives similarly.

A retrigger is possible; when retriggered you go back out and pick for the new bonus based on the trigger bonus symbol count, just like the original triggering bonus. You can retrigger 9 times, for a total of 10 bonuses in total from an initiating trigger.

There are a couple of aspects to this one:

Keep in mind that because the prizes have to land in frames, you could complete a cycle and have a poor outcome. But because you have some awareness of where you are in a cycle, you can with some confidence know what it will take to see it through.

Here is Cassanova Slots playing the game, and among their wins was a few jackpots:

Chasing the Bonus Slots played the game in this video, starting at 6:30:

Aarons Slot Channel played it on this video starting at 9:09: