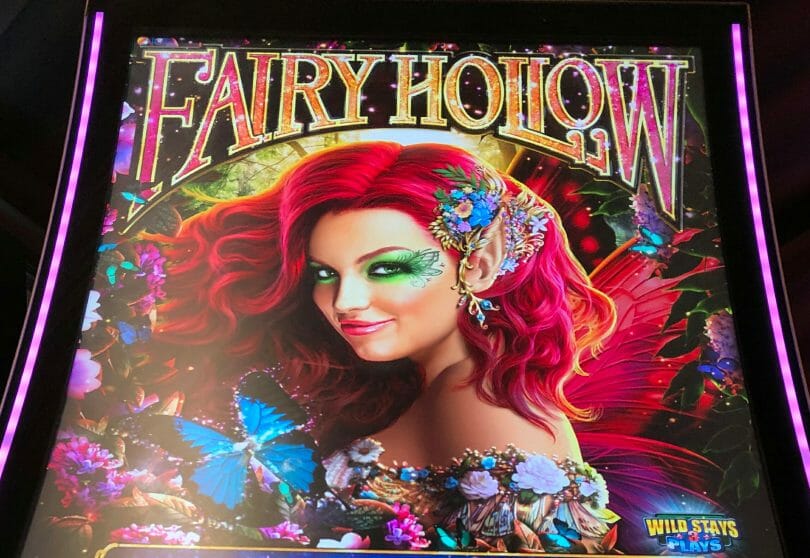 Game: Fairy Hollow
Manufacturer: IGT
Advantage play potential: Medium
What Makes it Special: Wilds stay around for a few spins, and if you get them on the same row/column, the spaces in between expand as well.

Fairy Hollow is one of the newest in a very lengthy line of persistent state games from IGT. What’s a bit different for me is that I first encountered this game late last year. I held off on writing about it because for awhile I could not find a single video or write-up on the game.

If the game isn’t actually in the wild enough, I’m not sure the value of a write-up. This was also the case for me for Ocean Magic Ultra last year, although I quickly found out my casino was just early to adopt that one, as it quickly was popping up elsewhere.

However, I have now found a video from a slot channel featuring the game, and a casino exclusive video from back in January on Facebook I previously didn’t find, so I’m moving ahead. I also learned why I may have found this game at a casino and didn’t see it anywhere else for so long. So today’s article will have both an overview of this game, and how I saw it so early.

Fairy Hollow is a 5×4 reel set featuring 40 lines of play and 50 credit increments for the baseline bet, and 100 credits for the Butterfly Wilds bet feature. In this way the bet structure is somewhat similar to an Ocean Magic, where you’re improving the core persistent state feature of the game with an increased bet. (I’ve talked about more/better features elsewhere on the site.)

On the baseline game, if you land a wild, it will stick for that spin and the two following spins. With the Butterfly Wilds feature, butterflies can come out and add wilds to the reels that also stay for that spin and the following two spins. IGT calls this Wild Stays 3 Plays, which is similar in naming to what you see on games with stick-around wilds such as Golden Egypt.

The game also features the End 2 End Bookending Wilds Feature. If you have two wilds on the same row or column, with other reel symbols in between, it will fill in those gaps with wilds. It will do this again if the filled in wilds create new End 2 End possibilities.

You can see on the reels above the Wild without a number; that one was filled in between the two Wilds with numbers.

The number on the Wild indicates how many spins, including the current one, the Wilds will remain. Each spin, the number decreases by one at the start of the spin, and if it reaches 0 they disappear.

Get three bonus symbols to win 10 free games. (Bonus symbols can land where wilds are active, and count as both for that spin.)

One big change in the free games is that now your wilds are 2x, with the same End 2 End Bookending Wilds Feature in play, and if you have the Butterfly Wilds feature active, that remains in play for the bonus as well.

There is also a symbol replacement aspect to the free spins bonus that replace a designated symbol on the reels to a randomly selected one each spin. There’s also a set of symbols on the reels of columns 2, 3 and 4 that transform into a Bonus symbol or Jack, which can set up a retrigger scenario if you get the Bonus symbols.

The last one is what makes this a bit different than the rest. Normally on games like Ocean Magic and its siblings you’d look for more wilds to the left with more spins. But if you have a bookending wilds setup active, that can be even more advantageous as you know it’s going to fill in wilds.

Now, having a wild on column 2 and 5 in the same row can be huge, because you’ll know those other two spaces will fill in, for instance. If it’s on a Butterfly Wilds bet, you have the potential for it to bring more out and take it further. So you have to look at wilds placement a touch differently, and it may open up plays that you might’ve avoided on the more straightforward games.

What doesn’t change from other games in this genre is you know how many spins the wilds are around, so your spend amount is easy to calculate. You can also see the wilds placement.

What also doesn’t change is you have 10 bet levels to evaluate to see if there’s an opportunity.

How Did I See it So Early?

Fairy Hollow was at Tropicana Atlantic City late last year. It was in a bank of games with another IGT game I had not seen before. That review won’t be forthcoming because I couldn’t get the touchscreen on any of them to work so I could review the rules, and I do my best to read up and present this information as helpfully as possible.

As you’ll see in the videos below, IGT did a market exclusive program with this particular game at Atlantis in Northern Nevada. So it’s possible that Tropicana was the exclusive home for this game initially in Atlantic City, and that’s why I only found it there. But I’ve also been to a variety of casinos between then and now, and hadn’t spotted it either. The game also popped up at Atlantis months after I saw it.

So is there another explanation?

I spoke with an industry veteran earlier this year who described an early testing program manufacturers can leverage in New Jersey, which many do. While games are being certified in New Jersey, a manufacturer can also put the game out on the casino floor to collect data and learn from players.

This is somewhat novel to New Jersey and is designed to help reinforce Atlantic City as a leading market for new games. I was told manufacturers can and will avail themselves of this opportunity.

For a manufacturer who has a new concept and wants to make sure all is well and that players enjoy the game, this can be valuable data to collect. The bank of machines was in a prominent place on the casino floor and had previously housed some very popular IGT game variations that were regularly in use when I visited, so it makes me believe this was a test bank as opposed to Tropicana just rotating games.

I saw a similar bank of machines at Caesars Atlantic City that had games like Jackpot Wild Winning Streak, a game I had never seen anywhere else for quite some time but have more recently seen it and its Egypt counterpart in Maryland and Nevada.

So it’s quite possible I lucked into a test program. It’s also possible Tropicana was the absolute first to get the game, although the lack of signage and marketing (casinos love to tout their firsts and exclusives) make me believe otherwise.

Here’s a video from Slot Lover featuring the game in action:

Here’s a premiere video from Atlantis in Northern Nevada. This seems to be where Slot Lover played it as well:

If you’ve been one of the lucky players to get a chance to get on Fairy Hollow, share your feedback in the comments!