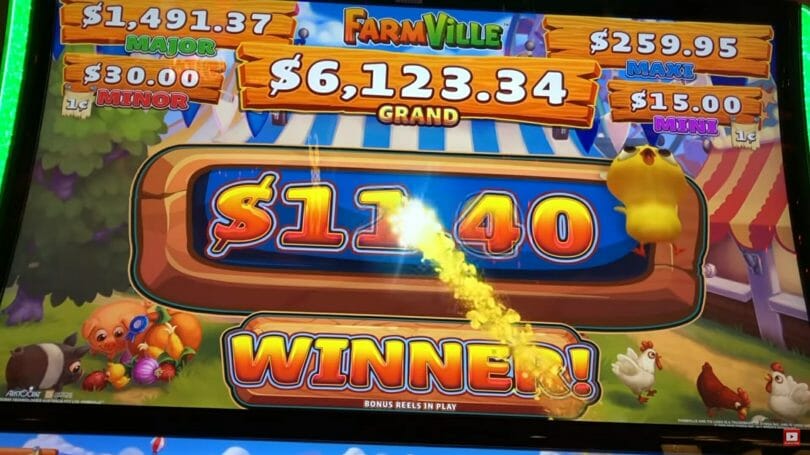 Farmville, like the recently reviewed Madonna, is a licensed game with a Mighty Cash mechanic and a persistent state mechanism around multipliers. Also like Madonna, the multipliers are focused around the Mighty Cash feature alone, and not any other aspect of the game.

However, how they approach the multiplier accumulators differ; in fact, that aspect has more in common with another persistent state game reviewed here, Buffalo Diamond.

Like the recent Madonna review, I did not have the ability to get photos on my own prior to doing this write-up, but I thank Slot Queen for giving me permission to screen shot some of her videos to illustrate the game. Once casinos are back open I’ll augment with what I can capture.

Farmville has a 5×3 reel set and on the penny level has 75 credit bet increments.

It’s a Reel Power game by Aristocrat, which means it’s an all ways pays game. The game offers a number of different features, which make the game pretty volatile, but exciting when you get one.

The pumpkins are the Mighty Cash symbols on this game. They can appear on all five reels, but on the fifth reel a ribbon can appear on the pumpkin in the colors of either blue, green or yellow. The colors are linked to the following multipliers:

This works similarly to that on Buffalo Diamond; whenever one of those are present (and not a bonus triggering spin), the number of games to which that color is linked increases by 1. This number increases until such time as that set of Mighty Cash spins is won. When the numbers get high, a visual indicator that it’s above the norm is added to the background.

Similar to Madonna, there’s a wheel feature when you trigger three or more bonus symbols, which in this case is the Wheel Bonus symbol. Also like Madonna, getting more symbols improves the values of the items on the wheel.

You can win credits, free games or the Jackpot Feature on the Wheel. The credits and free games prizes based on the trigger are as follows:

The pay table states the odds of the wheel changes with bet and denomination, which likely reflects the presence of the jackpot; presumably the odds of winning a jackpot increase with bet, like other games similar to this.

If you get the jackpot feature, you begin picking animals until you reveal three of one of the five jackpots. Whichever one you match three of first, you win. While I have not encountered this bonus or seen a video with it, presumably like others in this format it’s predetermined.

The odds of the Jackpot Feature change with denom, which also makes sense given the denomination can change the values of the lower progressives.

It’s also worth noting this is the only place where you can win the Grand – the other jackpots can land with the Mighty Cash feature.

Based on what you win on the wheel feature, you can get up to 24 games. You can retrigger between 8 and 24 games, depending on if you get 3-5 More Games symbols during the Free Games spins. The Mighty Cash feature can be triggered in the bonus. Otherwise it works just like the base game spins.

When the Mighty Cash feature is triggered (6 symbols is the trigger requirement) you generally pick from one of five pumpkins on the screen, which reveals which ribbon you selected, and therefore which multiplier and accompanying spins you get. There’s usually at least one green out of the five and sometimes more, but the blue isn’t always present. If you happen to get 6 Mighty Cash symbols and one’s a ribbon, you automatically enter Mighty cash with that ribbon selected instead of picking for a multiplier.

Then, you spin however many times is allocated on the ribbon you picked. If you get a full screen of Mighty Cash symbols before you run out of spins, your screen is multiplied by the multiplier you earned from the ribbon pick.

Then the base Mighty Cash symbols are upgraded a bit (and once more on the third screen, but then sits pat), you’re given a blank screen, and you spin for more. If you have enough spins, getting multiple full screens is certainly possible, each multiplied by your multiplier. At the completion of the bonus, the spin count is reset to the number noted in the bullets above.

This version of Mighty Cash, it is possible to land Mighty Cash symbols with one of the progressives, minus the Grand, which is only available in the wheel spin.

As the number of spins attached to the multipliers grows, it increases the potential value of those spins when it ultimately hits. But let’s say you see something spectacular like 100 spins at 4x. Here’s what you have to do to get that 4x:

Like Buffalo Diamond, it’s not something that would happen all that often, although I’m sure it does enough or we’d see ridiculous numbers on the screen. And if it gets high enough, and you have a deep enough bankroll, it’s probably playable. But that’s heavy duty commitment given it could take quite a few Mighty Cash triggers to get it.

Possibly a bit more interesting is if the 2x or 3x manages to get high enough, since those are much more attainable. To me, since you always get a multiplier when you trigger Mighty Cash, unlike Buffalo Diamond, it’s probably going to be unlikely to see all three numbers built up considerably.

Here’s a video from Slot Queen where she got a strong bonus on just 75 cents:

Here’s another video where the 4x was landed:

RandomSlots, as usual, has a great overview of the game, including screenshots of the pay table: