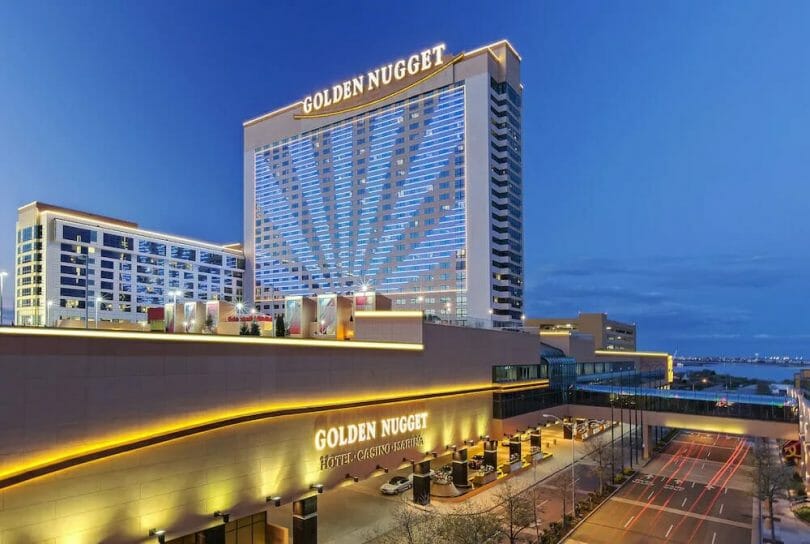 Among Atlantic City’s casino options, Golden Nugget isn’t the newest, or biggest, but it has held on in a highly competitive market that sees no signs of becoming less so.

Golden Nugget has sister casinos in markets like Las Vegas, Laughlin and Biloxi, but its outpost in Atlantic City is in a bit of a weird position. It’s not on the boardwalk, where most of the competition lives, but in the marina area where two much more massive properties rest.

It started as Trump Marina, and became a Golden Nugget property a bit over a decade ago, getting renovations at that time. Since then there’s certainly a contingent of players who enjoy the casino, and their online operations, featuring live dealers that deal from inside Golden Nugget itself, are among the most popular in New Jersey.

Let’s take a look at Golden Nugget Atlantic City, and what you can expect with a visit.

The casino floor is not massive at this property, but there’s a good amount of slots. There are a good chunk of slots of a certain age here, along with some newer machines to play as well. But I’ve been able to play games like Lucky Lemmings and 5-mechanical-reel Quick Hit here in recent years, games harder to find at other casinos.

I have not visited the property recently to see how table game minimums have been impacted; a visit just before the pandemic found them in the middle of the pack. Craps, for instance, was at a $10 minimum, in a market where $5 craps was already rare before the shutdowns and reopenings.

They had some video poker, and higher limit machines had full pay options with a reduced comp earnings rate. Lower denomination didn’t have anything to write home about, but was better than some of their competition.

There’s more than 700 rooms here, which look decently modern, although they were last updated awhile ago. Room rates aren’t bad, either, even for those without comps, so if you’re looking for an affordable place to stay this is one to check out.

Despite being away from the boardwalk, some of the rooms have some nice views, and they do differentiate them on the site.

Golden Nugget casinos have their own program, the 24K Select Club, which is linked to their other properties. One thing that’s quite unique about their program is comps earned at the casinos can be redeemed at hundreds of Landry’s restaurants throughout the country.

Slot points (which serve as free play) are only redeemable at the casino earned, but tier credits and comp dollars are a universal bucket redeemable at any Golden Nugget property.

As you tier up you earn more comp dollars and cash back, which can be redeemed if you visit within a certain amount of time. Cashback is earned only in AC and Laughlin, which works out to an added bonus. Cashback is valid for 90 days in AC, and is available 48 hours after it was earned, a nice way to entice a player to return.

There are four tiers to the program, but they don’t explicitly advertise how many dollars per tier credit, so it’s not publicly known how much coin in on slots or video poker it takes to reach the next level.

Their new player (as well as inactive player promotion, for those who haven’t been in at least 24 months) in Atlantic City has been consistent for some time – based on the amount of tier credits you earn, you earn free play, up to $100. And then based on that play your offers will be calculated, so it’s a great way to get things rolling.

Restaurants and Other Observations

Prior to the pandemic I ate twice at the buffet at the casino, once for a regular evening and once for a seafood buffet. Both were enjoyable, although the seafood was very busy. I had tier matched and with the tier match was able to cut a very long line for the seafood buffet, so there’s definitely perks to having a higher tier card.

The buffet has been closed throughout the pandemic, but other restaurants, both more casual and more formal, have been open. There’s a good variety of choice despite the property’s size, but for the more formal sit-down options reservations are recommended given how busy they can get.