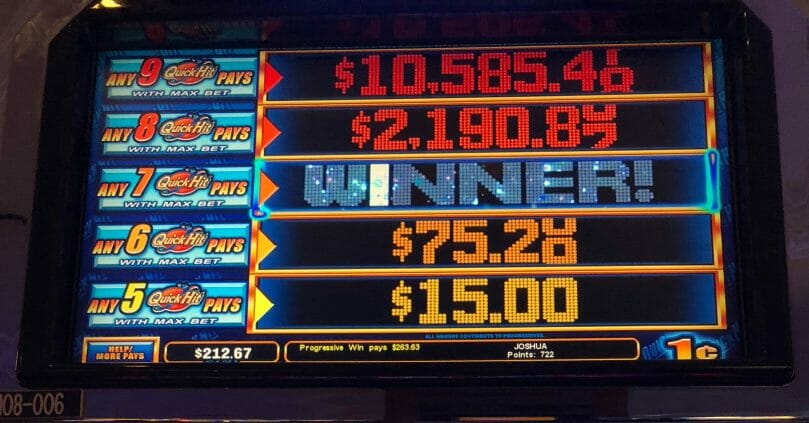 I’ve written quite a bit about Quick Hit machines, developed by Bally (now part of Scientific Games). Part of their charm is the multiple jackpot structure, with five (traditionally) or more jackpots available to players, with progressives in place on max bet.

Newer versions of the game push the max bet up and lower the value of the progressive jackpot as a multiple of your bet, but the classic 5-reel machines are still out there, and they’re among my favorites to play even now for a number of reasons.

To be eligible for the progressives on the classic version, it’s generally a $1.50 max bet. I’ve occasionally seen a $2.00 scenario, but that’s rare.

A $1.50 max bet makes the game accessible for lower rollers, who would normally eschew a $3-5 max bet but could give the $1.50 scenario an attempt now and then. The game has a 30 cent minimum bet (albeit without the access to the progressives) which makes it even more accessible, but $1.50 puts it within reach of a segment of players.

I’ve seen these machines in heavy use, even more than a decade later, at a variety of casinos. The fact that Quick Hit machines are still designed and produce indicate the enduring popularity of the format, and it was spurred on by games like the mechanical 5-reel version.

The Quick Hit Progressives Are Accessible

Obviously when you’re talking about the 9 Quick Hit progressive it’s not going to be easy to hit, but getting 5 Quick Hit symbols or even 6 happens with enough regularity to keep the game interesting.

The pay stack for the symbols also are quite generous and keep a player going more often than not:

Even getting four Quick Hit symbols gets you 5x your bet, and that’s helpful when you’re wagering $1.50 a spin. So the game has some volatility to it, but it’s got the line hits and progressives to back it up. A 10x bet starting progressive isn’t a huge leap, so it comes out with pretty good frequency.

There are a number of themes available for this machine type. I prefer the Wild Red and Wild Blue variations, which are a bit more straightforward and have good line hit potential, but the 777 Wild Jackpot one has been solid for me as well.

I’m not as big of a fan with the variations of the game that have three colors and bar colors, which seem to be a bit harder to get line hits when I’ve played, but perhaps that’s just been bad luck.

The free spin bonus has some volatility as well, thanks to a picking bonus that comes with the landing of a free spin bonus. You can win any of the following options:

There is also one Wild space; it will not only match any of the above when you pick two, but adds 5 additional spins. This means your top potential is 25 spins with a 3x multiplier. You can retrigger, giving you the same amount of spins you got from picking, with a maximum of 50 spins.

The Quick Hit progressives are set aside, but you win the base level prize times the multiplier, so they pay a lot more in the bonus as well. For example, this six Quick Hit win on a 3x bonus netted me $225, a 150x hit on just one of my spins.

Side Note on the Picking Aspect

Most of the mechanical 5-reel Quick Hit machines are true pick when you get to that bonus round, but Brian Christopher and I have had conversations about this over the past couple of years.

We both have played at Empire City Casino in New York, where it’s not a true pick because the payouts are determined outside the machine, so the bonus is just going through the motions to show the final outcome. We both thought that was the only scenario where this happened at the time.

I did a deeper dive on the game overlaid with some live play as part of a video with the American Casino Guide Book team:

See Brian Christopher hit it big on a 5 cent version of the game here:

Here is another video from him from a few years ago, where he plays a 2 cent machine, only 20 lines, but $2 max bet (and as it turns out, is also predetermined picking):