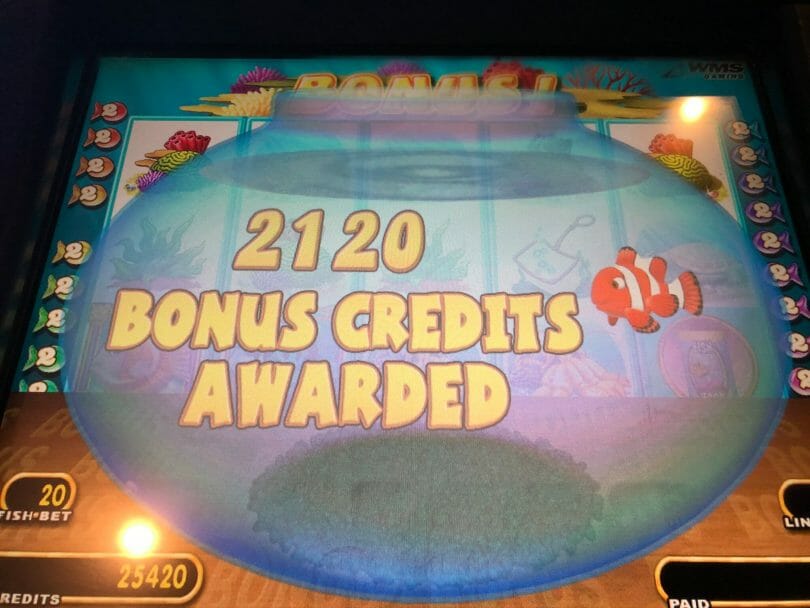 One of my favorite old-school WMS games has to be Goldfish. The game has seen its share of sequels, but the original is a simple, fun, active game that features six different bonuses to keep things interesting.

Despite the age of the game, many classic Goldfish machines remain in play in various locations such as Atlantic City and Las Vegas, but as time marches on, Scientific Games has thankfully put some energy into reissuing the game, under the name Gold Fish Classic, which is making its way back onto other casino floors.

The main bonus is the Fish Food Bonus, a true picking bonus that has you attempting to match 3-4 of the same fish (4 gets you 2x the prize) as much as you can while avoiding the turtles; three turtles will take you out of the bonus and give you one last prize to collect.

After any base game spin, you can get one of five random fish bonuses:

This is one of those lower volatility, high feature games that’s a lot of fun to play, and keeps things engaging, so it’s exciting that the game is making a comeback on the casino floor.

If you can find the old school version, those are still the best to play, but I’ll take the remake as a consolation prize if I can’t find the original.

King Jason Slots had a great run on the game on dime denomination version at Paris Las Vegas:

And here’s RandomSlots with some bonuses and the pay tables: