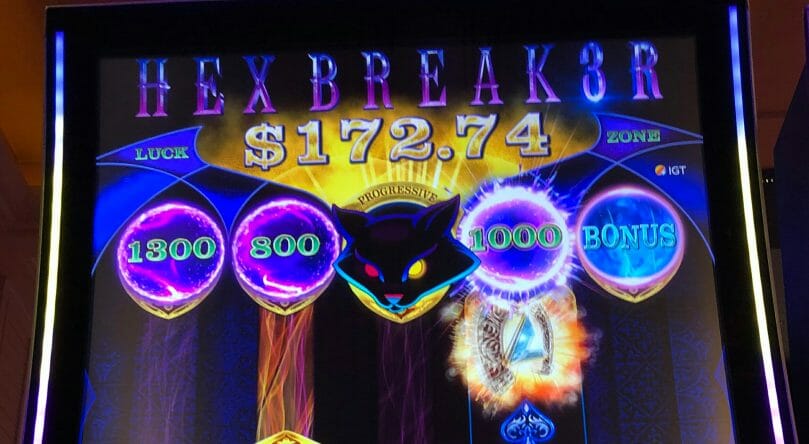 Game: Hexbreak3r
Manufacturer: IGT
Advantage play potential: Medium-Low
What Makes it Special: Arrows appear to increase a reel towards the top of the screen, where a prize can be won. The number of ways the game pays increases while reels are increased. System is mirrored in the bonus.

Hexbreak3r starts as a 5×3 reel set but I think it would be unlikely to find it in that state the way it’s designed, as the reels will grow through the Expanding Reels feature, which I’ll get to momentarily.

The game has 80 credit bet steps. Each bet level has its own set of persistent state reels. The game indicates which bet level(s) have the tallest reels. The tall reels have two benefits, which I’ll also discuss shortly. There’s also a progressive available, which increases based on the bet level selected.

The game pays left to right, as well as right to left, a consistent feature of this series of games. So not seeing symbols lining up on the left side doesn’t necessarily mean you didn’t win somtehing.

It’s a volatile game, mixing all ways pays with stacked symbols, making for a tough game. Furthermore, the game has a mystery symbol feature, where each spin 1-4 symbols are selected and placed on various parts of each reel designated for this mystery symbol.

The fact it uses 1-4 mystery symbols further adds to the volatility, meaning you could get a ton of a single stacked symbol, potentially lining up something amazing, or get multiple symbols, spread out across the reels to block a line hit from occurring.

The pay table confirms that each reel may get something different. The wild symbol cannot be part of this substitution, making the ability to line something up more difficult. Wild symbols are also stacked on their own, but only on reels 2, 3 and 4.

If an up arrow appears in the base game, the reel expands. In both cases one reel symbol (usually) is added to that reel, expanding the number of ways pays, and inching the reel closer to the Luck Zone.

I say usually one reel symbol, as on occasion the game could award more (I’ve only seen two total). It’s not often though.

If a reel expands and reaches the Luck Zone, whatever is in that reel’s bubble will be awarded. Then that reel will reset to its original three symbol high status.

As you can expect, with the progressive in the middle reel, you don’t get expanding reels as often in reel 3, which likely also helps to suppress some of the line hits, just further adding to the game’s volatility, especially when you factor in the left-to-right and right-to-left payment model of this game (reel 3 overlapping with both directions).

There are two ways to trigger the Free Spins Bonus:

You then get what is dubbed as unlimited spins, because there’s no set spin count. Instead the reels flip on their head and start with a 5×3 reel set at the top of the screen. At the bottom, you have the Jinx Zone, which is like the Luck Zone but has slightly different prize outcomes:

As long as you don’t reach a skull and crossbones, the bonus continues to spin, and with taller and taller reels the chances of a good line hit increases.

Like many IGT games with persistent state reels, the bonus isn’t all that easy to hit. But you’re also guaranteed at least 10x on the bonus, thanks to the way this particular game was designed.

In this case, there’s two things at play here. One is how close a given reel is to the Luck Zone. If you have multiple reels getting close, you have a better chance of securing the credit prize. If the credit prizes happen to be bigger, the advantage is greater.

The progressive sits on reel 3, so that reel doesn’t move as much. If it’s near the top, It is certainly a play but it will be harder to achieve.

However, that leads to the second aspect – a tall reel three, especially with other tall reels, means thousands of ways for the game to pay, and so line hits should be better. So if you find a game with a lot of tall reels, including reel 3, you might be able to wring some game-helping line hits out while you try to achieve the Luck Zone prizes or a bonus.

The most advantageous scenario is likely finding a game with tall reels 2, 3, and 4, because:

However, that doesn’t mean having reels 1-3 or 3-5 is bad either. But if you have a short reel 3 it will suppress many of the line hits, meaning you’re chasing an arrow to get a 10x or more prize – you can easily burn through that just getting an arrow.

All that said, this is a tough game – just during my sessions I found it very difficult to get line hits, and the Expanding Reel Feature didn’t come out all that often.

RandomSlots features a video with four Advantage Play sessions, including a bonus:

Brian Christopher also recently featured the game on his channel (Hexbreak3r starts at 21:25). He had a bit of better luck than I did, but definitely saw the toughness of the game to some degree as well: