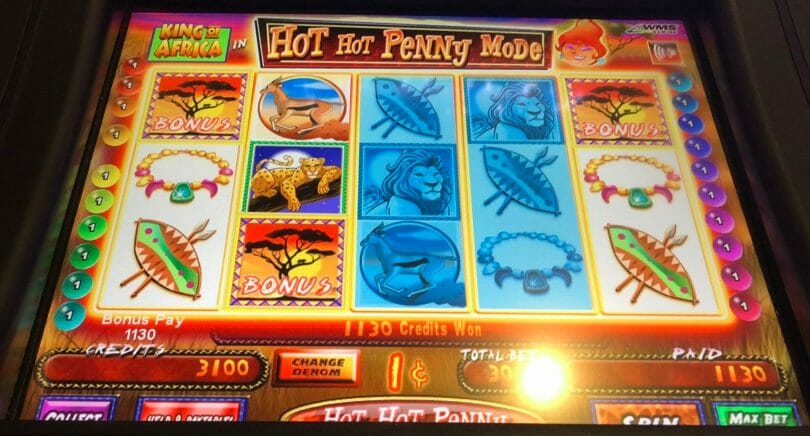 While the games are harder to find given they’re approaching 20 years old, the original Hot Hot Penny series of games still survives in many casinos to this day. They’re a great example of a game that could offer some good potential on the line hits, and stellar potential on the bonuses, and used the Hot Hot Penny feature to bring more frequent bonuses, a feature that is standard now but was pretty exciting back then.

The Hot Hot Penny family of slots, in its original form, was an example of a More/Better bet scenario that WMS offered on that series. The game featured 20 lines with two bet options (presuming you bet all lines; the game, as many in that era, would also let you bet less lines): a 20 credit option that covered the 20 line spread, or a 30 credit option that included the Hot Hot Penny feature.

Further adding to the interest is a 5×5 grid at the beginning of a Hot Hot Penny bonus. You get 8 free spins, plus the one pick for each bonus symbol. Most of the spaces will award 1-3 bonus spins, but there are three pennies on the board, and the more of them you find, the better you do:

The bonuses differ by version; King of Africa has one full reel wild each spin. Gem Hunter and Emerald Eyes lets you pick a symbol for credits each time. Blue Lagoon comes with a multiplier on all wins. Star of India also features a multiplier, but only when the wild symbol is incorporated. Planet Loot features stacked symbols of the top symbol and wilds. Retriggers are possible and occasionally frequent, adding 8 spins each time.

The series as as whole comes with the opportunity for good base line hits as well; since you only have 20 credits per spin, and the higher paying symbols pay well, 40-60x wins are possible and not that unusual on the base game.

These games tend to be lower volatility, all things considered, but with some good potential; I can generally put my money in and play for awhile on one of these, and still have a good chance of cashing out in good position.

A sequel came out in the Blade era of machines, Hot Hot Penny 2, that used a wheel for determining spin count, and had the respin for two bonus symbols, but no choice over how many lines to play. But it still retained some of the benefits that made the game fun.

Here is a compilation of bonuses from SlotMachineBonus on Gem Hunter:

Here is another video from SlotMachineBonus featuring King of Africa: