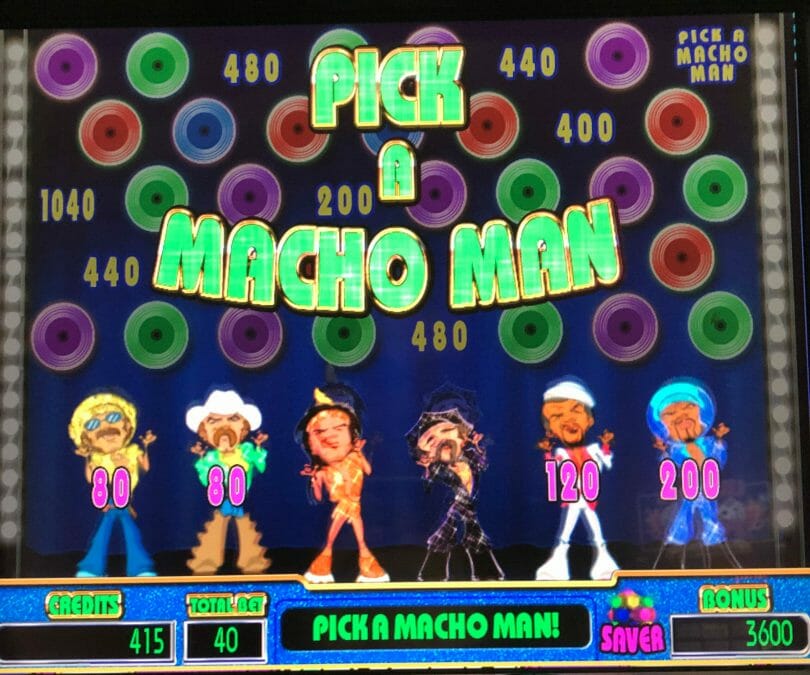 So just because you have “control” doesn’t mean it has any lick of difference over the long term output. Your “good picking” is something you understand in retrospect, after a bonus is over; your odds of your next pick being a winning or bonus-ending one still follows the math.

With me? Great – let’s talk about telling the difference.

What Else Was There?

One common way slot manufacturers communicate that a given picking bonus is not predetermined is showing the unpicked options when a bonus concludes. Village People Party, for instance, has 38 records you can pick, 9 of which are poopers.

You have the ability to get a Party Saver, which lets you pick two poopers before ending the bonus. You also have the ability to skip a pooper if you pick a multiplier and then a pooper – it lets you pick again. But 9/38 gives you a just shy of 25 percent chance of picking a pooper. The farther along in picking, especially if you pick more Macho Men, the bigger the bonus will get, but the lower the odds of getting that far along.

Hence, you can see how a true picking bonus can be designed to have exceptional payouts rarely, and smaller bonuses more often, to ensure the math works.

When it comes to progressives, we have a lot of examples of predetermined bonuses – the progressive picking on Dancing Drums is representative of the common style of picking bonus for a progressive. Once you pick three, the progressive amount is shown on the screen, without revealing the rest of the options.

In fact, it’s most often a progressive picking bonus that’s predetermined, vs. picks like on Village People Party, or games where you pick a multiplier or enhancement, Quick Hit free spins counts, etc., where the pick is nearly universally a true pick.

So, we know that a bonus is generally predetermined if the options aren’t shown. So does that mean all picking bonuses that show the unpicked options are true pick? Unfortunately no; we previously covered here how Smokin’ Hot Stuff Wicked Wheel is predetermined, and it gives it away by what it reveals.

In practice, it seems like the Major is won the most on the game. On my cruise earlier this year, the Ultra (the second highest progressive) was only won twice on a very active bank of six machines. If it was a true pick, and there’s only three of each, that shouldn’t be possible. Everi is playing a bit of a deceptive game here, violating standard slot practices that most manufacturers follow over picking – there’s no reason to show the unpicked options if it’s not a true pick.

So we move to an example of a true pick that shows how the math gets balanced out for progressives to allow it to be so. Here’s Rising Panda by Scientific Games, and its picking bonus. First off, notice the dots under each progressive – to win a certain progressive, you have to pick:

Already we can see here a difference over Smokin’ Hot Stuff Wicked Wheel – presuming the same number of each, you are going to be more likely to win the lower progressives by the nature of needing more of the Grand than the Mini. But now let’s take a look at a fully revealed board, as seen in a recent Brian Christopher video (embedded at the end if you wish to watch the full bonus):

Despite only being 20 dots on the top, there’s 32 boxes on the picking board with the following breakdown:

You can pick a maximum of 17 picks before guaranteeing filling one of the four. The combination of the Mini being in the most spaces, as well as requiring the least number of picks, amps up the chances of winning it. Minor is behind it, but solid odds.

On the other hand, the grand is the hardest to win by far, but is mathematically possible on every picking bonus, so from that perspective the game is being quite fair at giving you a shot at it. But you would have to have really lucky picking to accomplish it.

Just to show another board, here’s another one from when he won a Mini jackpot. The breakdown of picking options was the same as the major, but you can see Brian picked the mini in just 5 selections.

As with a lot of this, common sense should prevail – if you see a reveal and the odds are equal, but you’ve been playing the game awhile and haven’t hit any big progressives, that should be a sign. If you see a reveal like the above, and it’s clearly weighted based on your picks, you can feel pretty good that it’s a true pick bonus.

But remember that regardless of whether a bonus is predetermined or a true pick, over time the game’s design will take the payouts where it is intended to go, so just have fun and don’t stress too much about it!

Here’s the Brian Christopher video featuring the Rising Panda progressive pick bonus twice within a couple of minutes (starts at about 8:30):