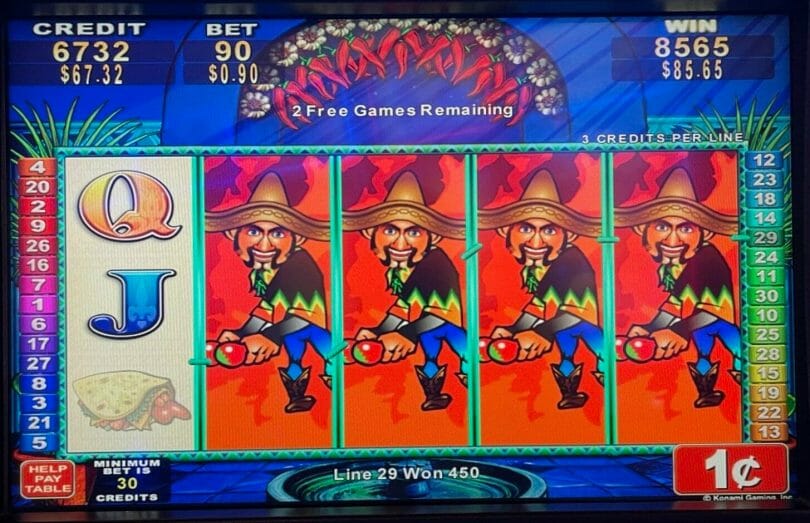 I don’t feature Konami games as often here, but it doesn’t mean I don’t have some of my favorites, and up there is the classic Jumpin’ Jalapenos.

The theme is featured in a few formats, including the 30 line version seen in the picture above, which I played on my recent cruise, and a 100 line, 50 credit version (in a 4x5x5x5x4 reel format) that some of their themes of that era were also offered under a number of years ago.

Regardless of line count and structure, the game’s main draw is certainly the bonus round, triggered when three or more bonus symbols come out. It’s not an easy bonus to necessarily get, so the 12 free spins are on the generous side.

But during the bonus round, the wilds nudge to fill a full reel, allowing opportunities like the image I share at the top of this article to happen.

Given that wilds can appear on any of the five reels, it opens the door to more frequent line hits, and particularly the valuable 5 of a kinds. The base game certainly sets things up for five of a kinds with stacked wilds that can deliver when they line up in the right way, but the ability for them to appear is enhanced by the nudging feature.

It’s a volatile bonus, and duds can certainly happen, making the game even more exciting when the wilds make their way out, and in good numbers.

Their appearance will frequently make or break the bonus, but there’s also a stacked symbol component to the game, both in the base game and the bonus, which can lead to some other good-paying line-ups as well.

The ability for the bonus to overperform and the stacked symbols make this game a pretty fun Konami classic, and the theme continues to make its way out in various sequels.

RandomSlots has the pay table and a bonus on the 100 line version of the game:

TheBigPayback had a great session on the 30-line video: