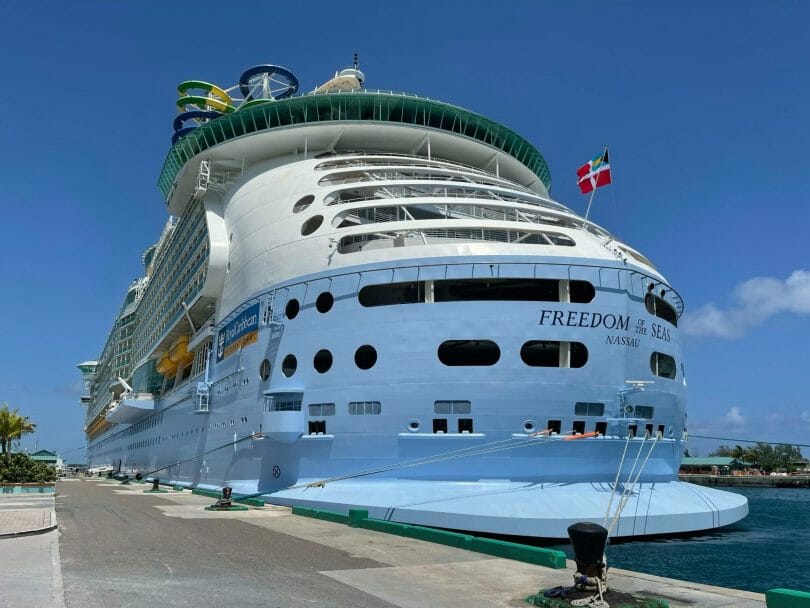 My recent visit to Miami was due to a cruise I took earlier this month on Freedom of the Seas. This was a remarkably different cruise than anything I’ve taken in the past, which makes sense given the current CDC recommendations for ships.

Our ship was under 50 percent capacity, and given that it was such a different experience. Despite the extra room left for things like social distancing, it was not difficult to get into various venues for shows or activities, to take advantage of things like the water slides on the boat, and of course play in the casino.

Royal Caribbean has designated the casino a vaccinated-only space, meaning only vaccinated individuals were allowed into the casino to gamble. It also made the space a masks optional area. With this setup, all the machines were on, no plexiglass was to be found, and tables were available at full capacity (we had 7 chairs at the Blackjack table my group favored throughout the cruise).

The casino felt like a Royal Caribbean casino. There were a lot of older machines overall, but there were specifically banks of some popular games like Mighty Cash, Dancing Drums/Double Blessings, Heidi’s Bier Haus, River Dragons, Lock it Link (Piggy Bankin’ and Hold On to Your Hat) and Golden Egypt.

A good chunk of machines on the ship were multi-denomination, an easy way to sidestep the need for high limit specific machines. There were only a few machines, recent vintage Wheel of Fortune machines, that were locked in at the $1 denomination.

I found games like Blazing 7s that had quarters to $2 denomination, for instance. And many penny machines would go up to dimes.

Like before, $5 of coin-in on slots was worth a point, and every 250 points was worth $5 in free play. If you accumulated 5,000 points you could also choose to redeem that for $100 towards your bill; it used to be a lower requirement but the casino host on board told me that had changed as part of the return to sailing.

When it came to tables, they had Blackjack starting at $6 minimum. That included the side bet, so if you did $5 on the main circle and $1 on the side bet, that qualified for the minimum. They had single deck Blackjack at $10 minimum. Any Blackjack table below $15 a hand paid 6/5 for Blackjack; $15 and above paid 3/2. This was consistent with my previous experience on a Royal Caribbean ship.

Craps had a $5 minimum bet but 1x odds; you could get bigger odds with higher bets. They had other games like Roulette, 3 Card Poker and Ultimate Texas Hold ‘Em as well, with accessible minimums. They had a surprisingly robust number of table games relative to the casino’s overall size.

Don’t expect to earn many points playing table games; multiple hours of Blackjack over a couple of evenings yielded roughly 50 points. Slots and perhaps Roulette are where the best chances of earning points can be found, because of the higher house edge on those games.

I saw handpays and major wins; I had some decent hits but it was a bit of a tough go at times, not surprising for a cruise ship casino. I actually had decent luck all week on Blackjack, with multiple nights ending up ahead or even on the game. It was a good thing to play when the slots were beating me up.

Even with a short four-night itinerary I was able to earn enough points to renew my PRIME tier and qualify for free future cruises, so it all worked out.

It’s not the biggest casino I’ve seen on a cruise ship, and the game selection was a bit limited even for the machine count they had, but it was still a fun time. And with less people on the ship than normal, it wasn’t that crowded, which was perhaps the best feature of all.