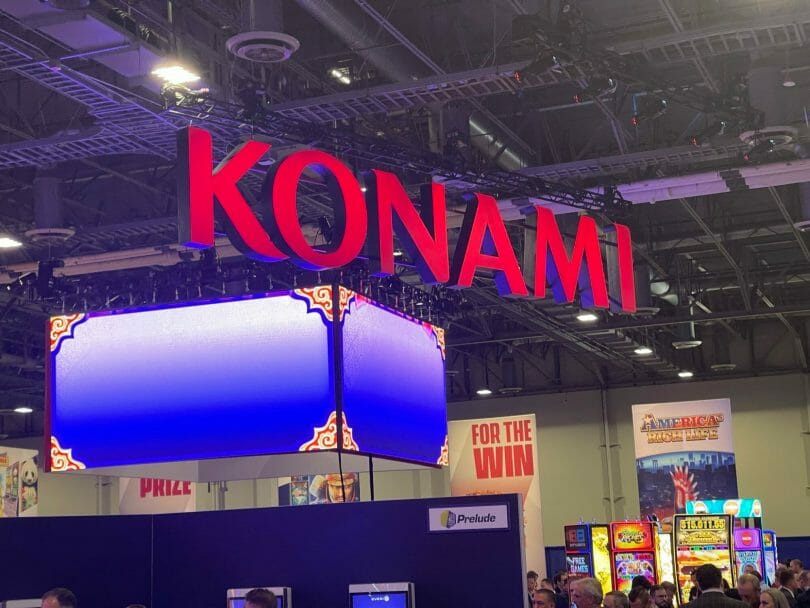 Konami hit Global Gaming Expo 2022 with a pretty diverse array of offerings. Some of their games leverage popular themes and carry them forward, while others broke some new ground and should shake things up for the next year.

I had the opportunity to tour the Konami booth with Ian Arrowsmith, Senior Director of Game Development at the company, and he walked me through a number of games his team was responsible for.

I reviewed a few others with their Director of Marketing and Communications, Tashina Lazcano. They also made time available for people like myself to capture photos and videos of the games unobstructed during off hours. I thank them both for the opportunity to check out what Konami is up to!

Here are some of the games that caught my eye during my visit to the booth this year.

This was by far the most left field thing I saw on display at the booth. Konami just went for it with red white and blue theming, a dancing eagle and a licensed song from James Brown, “Living in America.”

Six or more wheel symbols take you into the wheel, and the eagle can help you fill in the gap. The six credit prizes become the base amount for the feature. You get three spins, and each spin the credit amount landed is added to each wedge on the wheel.

You can also land +1 spin on the wheel, which can land more spins, along with more boosts. The eagle can also mess with the wheel, offering a better prize or another spin. So it’s a bonus that has the ability to build with potential as you get more spins.

There are two base game themes, and each has its own free games feature, but the focus is the wheel.

One of the intriguing early-stage games on display was BUZZR, a game themed off the classic game show TV channel. Game show slots have had a good position on casino floors historically, but it’s been awhile since some classic games have been brought to a slot machine.

BUZZR shows classics like Beat the Clock and Card Sharks, and while the game’s final setup is still to be seen, expect bonuses themed to some of these classic games to offer a bit of variety over the bonus opportunities.

Last year, it was Battlebots that was early in development, but now the game is approaching release. It’s based on the TV show, which has had multiple lives and is currently airing on the Discovery Channel.

The bots can come out and expand the reels. Giant symbols can yield bigger pays when they land in just the right way. A jackpot symbol can yield a jackpot picking screen with a predetermined pick bonus to win either a progressive or a bonus prize.

Three or more Battlebots symbols triggers a bonus. You pick a team to reveal your games and multiplier. Bots can come out and give you more games and expand the reels for the remainder of the bonus.

RandomSlots checked out the game during his booth visit:

Another new game from the company that caught my eye is a series called Triple Tower. Getting enough cash on reels prizes on the first reel set unlocks a second reel set just to work to get more prizes.

Getting enough on the second reel set then unlocks the top reel set, which depending on the theme can yield bonus prizes like jackpots. One theme features multipliers while the other features nudging reels to reveal more orbs.

This Triple Tower feature is designed to happen frequently, every 21 or 22 spins on average, depending on the theme, so players who like a regular feature game will definitely find this one to be worth seeking out.

Konami has introduced some pretty intense all ways pays games, and Lucky Drums is likely to fall into that category as well.

As you can imagine by the name of the game, lucky drums are at the center of the action. Getting three or more drums does a few things. First, they’re wild, so you get your line pays. Then, you get a respin, with a double high reel set, yielding 7,776 ways to win.

Getting a drum also has the potential to trigger the bonus, which lets you pick for a progressive or bonus jackpot. An extra jackpot can also be awarded.

The drum feature is designed to occur pretty frequently, which will keep players engaged with the game. And the all ways pays scenario offers lots of potential. Lucky Drums features two themes, Lion and Dragon, with the same core features.

Konami has some crazy free spin games in their portfolio. While it certainly can be fun to get hundreds of free spins and the chance for a lot of retriggers, that can be a lengthy run on a game without bathroom or food breaks. So Konami has tried something a bit different with these themes by launching a new version that takes advantage of the reel estate on their tall cabinets.

Mayan Chief Pyramid will award not only free spins, but reel sets, where you get your hundreds of spins but played out across a bunch of reel sets at the same time. So you can knock out potentially 24 free spins at a time with 24 reel sets above the reels.

You still have the potential for big wins since any reel set can have multiple mystery symbols reveal something awesome. You’re still getting oodles of spins, just spun out much faster.

Another new addition is jackpots, which can be awarded when enough jackpot symbols appear on an individual reel set. A China Shores version will also be available.

Purple & Gold Slots walked around the booth and showed some of the games coming up: