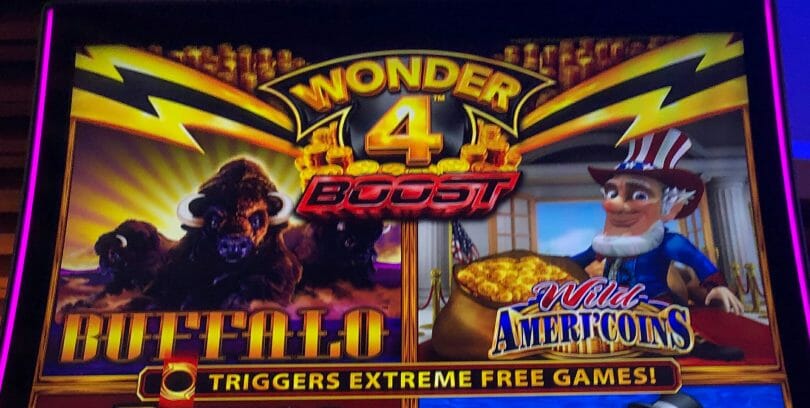 The Wonder 4 series by Aristocrat is one of the more enduring series of games. Its popularity hinges on the ability to play up to four boards at a time, and the potential for Super Free Games, which carries multiple board into the bonus.

However, with four boards activated, it increases the bet accordingly. On Wonder 4 Jackpots, for instance, a $2 bet is standard regardless of game choice. But there are at least three relatively versions of Wonder 4 that offer a $1 bet with four games, great for lower rollers who want to have access to the game. In today’s post I’ll go over how to activate a $1 bet on three of the more popular titles in the series.

It should be noted that while these cover more modern versions of Wonder 4, earlier ones included the same games mentioned below, so the same configuration would work. However, their Super Free Games work a bit differently than here, so you’ll simply have a different bonus experience on them.

Wonder 4 Tower has two less expensive games in its line up: 5 Dragons at a 30 cent bet level, and Pompeii at a 25 cent bet level (when minimum betting). Wicked Winnings is a 50 cent bet, while Buffalo is a 40 cent bet. That means if you have one of each board selected you’re looking at $1.45 a spin. That’s not too bad, but you can still drive it lower thanks to the lower cost of the Pompeii and 5 Dragons selections.

You can bring that down to $1 by playing four Pompeii boards, which brings the bet level down to $1 thanks to the four 25 cent boards. Of course, you can mix and match if you don’t mind spending a bit more.

Pompeii, like many of the other Aristocrat games with a 25 cent bet back in the day, has the potential for some massive line hits. In the bonus, the volcanoes not only serves as wilds, but also as multipliers, which can amp up pays quite quickly. You can get a sizable hit on 25 cents.

Similarly, 5 Dragons has the ability to choose a multiplier and the number of games, which if you get a Dragon, not only serves as a wild but a multiplier, so it too can get pretty hefty if the right symbols line up. Of course, given it’s a 25 cent bet game with multipliers, you can also have a lousy bonus, but both games have the potential for big wins even on line hits, and at $1 a spin your bankroll should last a while.

Wonder 4 Tall Fortunes has a higher $1.95 bet when one of each games is activated. This in part has to do with two 60 cent bet games: Buffalo Gold and Miss Kitty Gold. There’s also a 50 cent game, Wild Leprecoins.

As such, unlike Wonder 4 Tower, the other games are a significantly more expensive choice than the 25 cent board that Indian Dreaming brings to the table.

With Indian Dreaming, you can achieve the same $1 bet given its 25 cent per game cost. in the bonus, similarly, the Tepees, which are wild at all times, become multipliers as well, which bring the ability to amp up the pays similarly. But it also has the same risk of no big win here as well.

Wonder 4 Boost falls somewhat in between the other two, with one of each game activated yielding a $1.65 bet per spin. The other three games are Rhino Charge at 40 cents, Wild Americoins at 60 cents, and Buffalo at 40 cents.

As such, the games remain more expensive than the cheapest option, Whales of Cash, by 60% or more, but there’s still a way to that $1 bet.

Whales of Cash is the 25 cent per game choice here, with the whales serving as x2 multipliers in the regular games, and x4 in the bonus. Wonder 4 Boost also has the ability to activate Extreme Free Games, either triggered outright or earned through a Boost in the bonus (hence the name of the game).

Another Wonder 4 Option That Comes Close

Wonder 4 Spinning Fortunes offers Whales of Cash Deluxe, at a 30 cent bet per board and therefore a $1.20 bet. The main difference between the original and Deluxe is Deluxe can trigger a Deluxe free games bonus that has either more spins with a 5×3 reel set, or the same number of spins as the original Whales of Cash but at a 5×4 reel set.

Both amp up the bonus, and that is where the extra nickel a spin is ultimately going. Spinning Fortunes also has progressives where Boost does not, so if you’re looking for a game that gives you a bigger swing for your bet level, that may be worth the option, but Whales of Cash Deluxe is simply a harder game with a 20 percent bet increase for a chance at a better bonus.