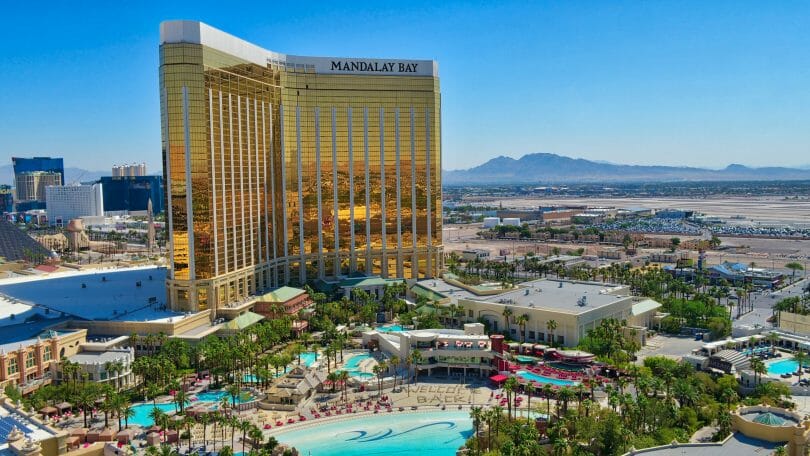 Mandalay Bay anchors the southern end of the Las Vegas strip, part of a zone of Mlife properties that includes Luxor and New York-New York, previously reviewed here. But unlike those two and others, Mandalay Bay has a very subtle theme to it that just feels more like a generic casino, albeit one with a more upscale feel.

The property has now been around for more than 20 years, although it’s still on the newer half of properties in Las Vegas, and it does have a lot to offer for those who visit.

Mandalay Bay features a large casino floor that has a very adept mix of old and new. It’s one of the casinos in Vegas I can reliably count on to find a good number of older games that I can’t find very many other places, like Village People Party.

They also have a lot of modern games, which is thanks to their having 135,000 square feet of available gaming space. There’s a substantial section of higher denomination slots, along with a strong array of lower limit (primarily penny denomination) machines.

Table games are there but for the size of the gaming floor, there’s not a huge amount. The table game minimums are pretty standard for Mlife casinos on the strip overall, a bit on the higher end of the range at times but not like Bellagio, for instance, from what I’ve seen. But the limited number means if you’re a table player you might want to explore elsewhere in the Mlife group.

Mandalay Bay has two hotels, the main resort and the Delano. Delano is an all suite hotel, while Mandalay Bay has both rooms and suites. The Delano rooms are larger and more upscale accordingly, but both offer quite luxurious comfort and definitely are among the nicer room stock in the MGM Las Vegas portfolio.

Delano, as a separate but connected hotel, is a bit of a walk from the Mandalay Bay casino floor, but as far as Vegas casinos go it’s not a massive walk and it’s near the garage so you have easy access to a car if you’ve got one.

Mandalay Bay is owned by MGM and therefore part of the Mlife Rewards program. You can earn comps, bill back to your room, and so on from any MGM property in Las Vegas, which is a nice perk.

Mandalay Bay begins the southern end of a mostly continuous run that includes Luxor, Excalibur, New York New York, Park MGM, Aria and Bellagio. MGM Grand is across the street and Mirage is a bit further out.

Mandalay Bay is connected to Luxor and Excalibur by both tram and indoor walkways – effectively all three properties are interlinked well enough that you can get around without getting into a car, as long you’re OK with a bit of walking.

Mandalay Bay has a gorgeous pool complex for those who are looking for access to such, and a variety of food amenities that are pretty diverse for a higher end property.

My last visit, in September, showed some rearranging of the casino floor to allow more machines to be accessible while maintaining social distancing. On a floor like Mandalay Bay’s there’s certainly room to accommodate such an adjustment, which is great because it means more games available. I hope it stays that way as it was a nice adjustment.

You can book rooms at the Mandalay Bay Las Vegas through vegas.com, which offers a Best Price Guarantee. If you find a lower price while booking or within 24 hours, contact them and they’ll match it! Vegas.com routinely runs promotions on hotel rooms as well, making them a good place to check.