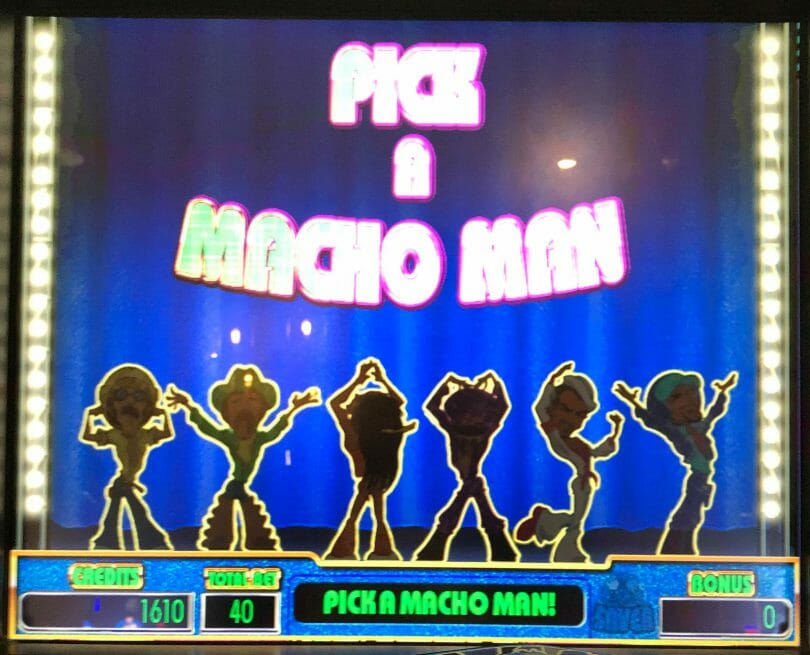 One of the first slots I can remember regularly playing was this gem, Village People Party, developed by WMS. The game is approaching 15 years old at this point, but thankfully it can still be found here and there, especially in Las Vegas, where I seek it out every visit.

When I was younger I used to love playing the game at Foxwoods, along with many other of the early WMS games, but they removed it a number of years back as they slowly began whittling down their older machines. While I wish the game would get remade, the fact that it was based on a licensed property doesn’t make me feel too optimistic.

Like many in the earlier Jackpot Party line of games, Village People Party had a really fun picking bonus that could get quite exciting. This version, befitting the theme, added in 5 songs from the Village People (there were 6 characters, but 2 of them had the same song attached). The men would dance to each song with pretty strong animation for the day.

Three party favors, on reels 1, 3 and 5, would trigger the bonus (there was also the rare surprise party which was an instant bonus trigger). You’d start by selecting a Village People character, hoping for the Party Saver along the way. Then you’d select records, with the value of the record being added to the value of the selected character.

Multipliers and Party Poopers were out there, but you were really hoping for “Pick a Macho Man,” which let you pick another Village People character. Now both of their values would be added to the record. Find it again, and you could get three values added, and so on. If you managed to collect all six, a 200x award would be added to your bonus, and allowed you to keep selecting records.

Similar to Super Jackpot Party, if you picked a multiplier and then selected a pooper, it’d skip past it, so it could be a good way if you were lucky to take out some poopers along the way.

At the end, it would show you everything you didn’t pick, which is a sign of a true pick bonus.

I can vividly recall a friend of mine and I having a ball during one bonus because her picking was unusually strong, and as “Go West” was blasting out of the speakers of the game, we were just goofing around and having fun. It was a 25 cent wager, but for us it was so entertaining.

They don’t make games like this very often to begin with, but it feels like there’s less games offering this sort of fun anymore. But even if the game fully disappears in the next few years, I’ll have a lot of fond memories of it.