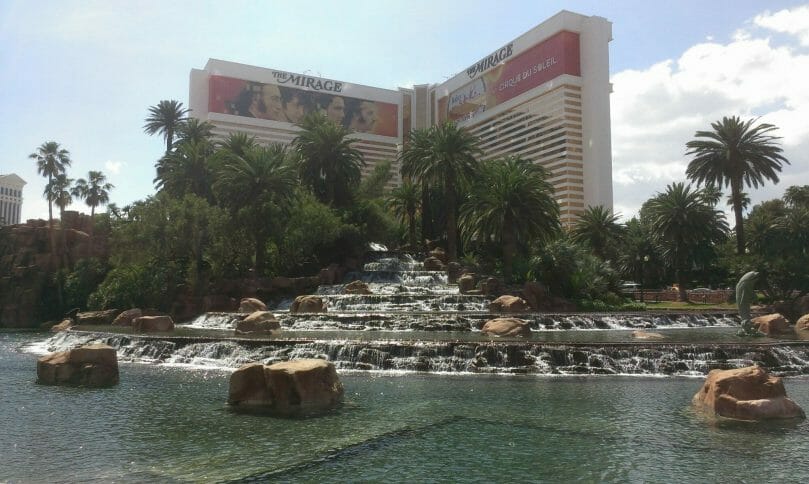 It’s an interesting transitional time in Las Vegas in a lot of ways. Between the COVID-19 shutdowns and reopenings, new property openings in Circa and Resorts World (with Fountainebleu on the way), and the number of properties recently changing hands, a town always in search of its next iteration is picking up the pace pretty fast.

One property that’s caught up in all this is Mirage, currently an MGM Resorts property, but one that is scheduled to change hands and soon be owned by Hard Rock.

That transformation is still a bit out, however, given the sale has yet to be completed. But in the next few years the property will likely be heavily reinvented as the home of Hard Rock hotels and casinos in Las Vegas.

As this article is published I’m about a month out from my first stay there (I love to check out properties just before and just after their transformations), so there will likely be further updates from my stay this summer.

But for now, let’s take a look at Mirage and what it has to offer.

The casino floor, like many properties in the MGM line-up, has changed pretty heavily in recent years. Many of the older machines have been removed in favor of more modern games, organized in pods as opposed to long rows. There is a healthy selection of older mechanical reel games, however, especially in higher denominations, so if you’re a fan of those you’ll find a good number of them here.

There’s a healthy selection of video poker on property, but like other MGM properties the pay tables only get somewhat healthy at the highest denominations, and cap out around 99%, so below full pay in most cases.

The Mirage is one of the rare places where I didn’t pay all that much attention to the table game selection – normally when I’m in Vegas I at least get drawn in at some point. Their site advertises all the standards, along with Bacarrat, Pai Gow Poker, Ultimate Texas Hold ‘Em, Three Card Poker, Crazy “4” Poker, Let it Ride Poker and Casino War, an eclectic mix of options.

Despite Mirage being slated to be transformed, the rooms aren’t that old, and are quite modern compared to some of the other MGM properties that haven’t seen some love in awhile (I’m looking at you, New York-New York and Excalibur). Even the basic rooms are set up pretty well.

Mirage rooms start at around 400 feet, and there’s a wide variety of room options from standard king and two queen options all the way to three bedroom villas. Presumably the wide variety will exist in a new form once Hard Rock updates the property.

The program underwent a major overhaul going into 2022 as it transitioned from Mlife to MGM Rewards. Tier credits are harder to earn in Las Vegas than they used to be, but things are now more even with the regional properties accordingly.

As one of the earlier themed resorts, Mirage is pretty darned gorgeous even today. The Mirage Atrium lets in natural light and features quite a bit of nature inside the building, which are things you don’t often see in casinos.

Meanwhile, the main lobby has an aquarium that sits behind the hotel front desk, another beautiful centerpiece within the property. There’s lots of eye candy on the property.

It’s currently home to Sigfried and Roy’s Secret Garden and Dolphin Habitat, but there’s no word yet on whether this will survive the transition. There’s also a Cirque du Soleil show, Love, based on the Beatles music, which wasn’t my cup of tea but many people say in various forums that they’ve enjoyed the show.

There’s a decent array of food choices; some of the licensed options had been downgraded to more generic variations (like the replacement of the Carnegie Deli with Snacks), but there’s a lot to choose from. The options lean towards the affordable, with options like California Pizza Kitchen and Diablo’s Cantina offering pretty accessible menus and pricing, and the required steakhouse is pretty much the most expensive option.

The Mirage has a very nice pool area, and also features an adults-only European style area as well, one of the few in Las Vegas that offer such an option. It also features a small shopping area, not uncommon for casinos in general, and features a standard variety of shopping options.