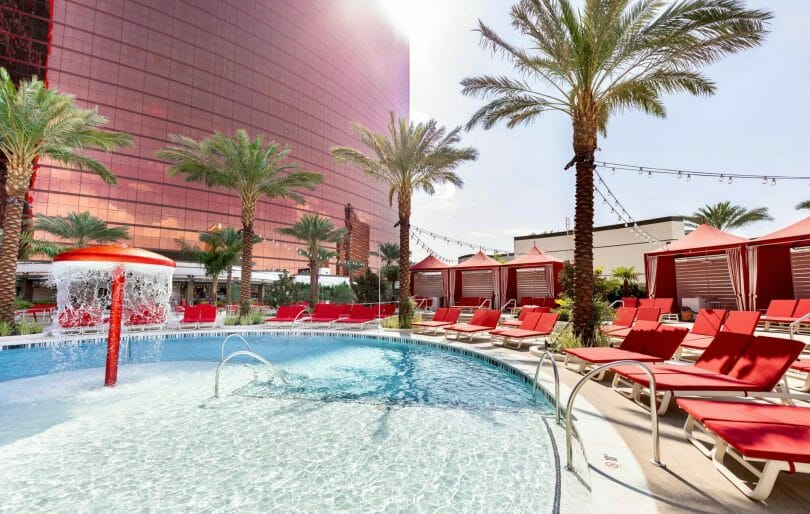 During my most recent trip to Las Vegas, I was able to visit Resorts World, the latest property to open on the fabled Las Vegas strip, and more than a decade in the making, going back to the project originally planned on the spot, Echelon, by Boyd Gaming.

I got to stop in twice over a few days stay, eat at one of the restaurants, play on the casino floor (including checking out their high limit space), and see one of the suites they had available.

Ultimately, what I saw was definitely nice, but still something felt missing. And when you look at the original plans of what was proposed, both by Boyd with Echelon and by Genting, who ultimately completed Resorts World Las Vegas, it’s not hard to see why. But there’s still plenty to enjoy regardless.

The casino floor is one long rectangular section with a curved ceiling over it. It’s a decent size, and being a brand new casino is loaded with modern games, as well as modern versions of classic games that are still available.

They had an interesting install of Buffalo Link with a sort of in the round presentation of a lot of those machines. The floor was very heavy on slots overall, not uncommon these days, with the machines pretty well spaced out, also not uncommon nowadays.

Off to one side, near the cashier, is a high limit room with a small but diverse selection of games. Some of the games were arranged in pods with individual TVs for the players – that was very unique and a clever idea, although that was limited to a handful of the games.

The bulk of the casino floor was penny or multi-denomination slots with accessible lower limits, so lower betters will find plenty to work with.

Any Video Poker worth playing was on high denomination ($2 and up) or expensive multi-hand machines of 25, 50 or 100 hands at denominations 50 cents and above.

Table games were largely in the $25 range when I was there. Resorts World has made no bones about it aiming for higher-end players and many of its choices seemed to highlight that. Another thing that was highlighted during my visit was how much quieter their casino floor was than many others I visited during my trip, so it remains to be seen how their strategy works out.

Overall though I did like the mix of slots on the casino floor, which given the newness of everything was actually a bit impressive – they seemed to go out of their way to ensure a good mix, and that’s a point in their favor.

One thing unique to Resorts World is they have three hotels, all part of the Hilton portfolio, on site.

Their baseline offering is the Hilton guest rooms, which as a brand is still decently high on the food chain, with modern decorations and amenities. Guest rooms start at 400 square feet, and go up from there as you get into suites.

The next step up is the Conrad, a more luxurious brand that also features larger rooms. A standard king guest room is 550 square feet, on par with properties like Wynn.

Finally, at the top end (in just about every way), is Crockfords, which also features standard rooms starting at 550 square feet, but is going to be a more luxurious option with better views.

I got to check out a Conrad suite and it was pretty nice indeed – these are great additions to the overall hotel line-up in Las Vegas, particularly for those entrenched in the Hilton program, as it means the chance to earn or redeem Hilton points.

While nice, however, I can’t say there’s anything unique or special about what I saw – it just felt like a modern room to me.

Resorts World is under a program called Genting Rewards. They have almost no information on the outside of their login, but fortunately it’s all outlined on the inside. You earn points based on play:

The level of transparency here is quite refreshing, and makes it pretty easy to know what you’re working towards. 1000 points is worth $1 in comps, which makes sense given the earnings rates as it puts it around $333 in coin in for $1 in comps on slots, or $1000 or so on video poker, in line with Mlife and other major casino programs.

As you tier up, you get accelerators for earning those points. I couldn’t find anything in their documents about what you need to earn to tier up, but the app is showing 20,000 points to reach their second tier, Fabulous. At 3 points per dollar on slots that’s about $6,667 in coin-in, which puts it lower than tiering up at Cosmo, for instance. But honestly there aren’t a huge number of perks as you tier up, aside from those point accelerators and extended time limits on being able to lock out a machine for play.

One interesting omission is hotel spend, which earns Hilton points, not Genting Rewards points. I guess that’s how they balance being part of the Hilton system.

Resorts World has adopted Play+, a cashless system that one of my home casinos, Mohegan Sun, had also been offering. The system is complex, requires a number of steps to get cash loaded first on account and then on the machine, and they charge you for the pleasure of that experience. I expect it to be awhile for these systems to take hold, and it’s going to take some simplification before I’ll use it personally – it’s much simpler to insert bill and hit spin.

They have a retail area that was still being filled out as I visited. They have some interesting art installations such as a globe with projection images on it that do make for some fun exploration of the property.

I ate with some friends at Brezza and it was a somewhat interesting experience in not the best way. There were service issues, the food and beverages served had their own issues (although my main course itself was quite good), and overall it just felt off. The windows looked out on things like a neon Ross Dress for Less sign, a weird scenario for what is presumably an upscale dining experience. I’m sure some of these things will be worked out with time, but there’s still some work to be done here.

This casino had a self-registration set of kiosks that was a bit of a frustration because it reads the information off your license. My license has an address I haven’t lived at in years, so I then had to go to the desk anyway to get them to fix it. It probably would have taken just as much time for them to create a card at the desk. But I guess I’m going to be in the minority and the supposed time savings of making us get our own cards will be worth it.

But it’s another example of high tech that takes away from that upscale feeling that a personal touch would traditionally deliver, and like the cashless gaming felt like a few too many steps for a person to have to navigate on their own without assistance. Technology can be deployed in ways that are helpful and speed up the experience, but many times at Resorts World it felt more like an obstacle. There, too, I’m sure they can resolve things with time.