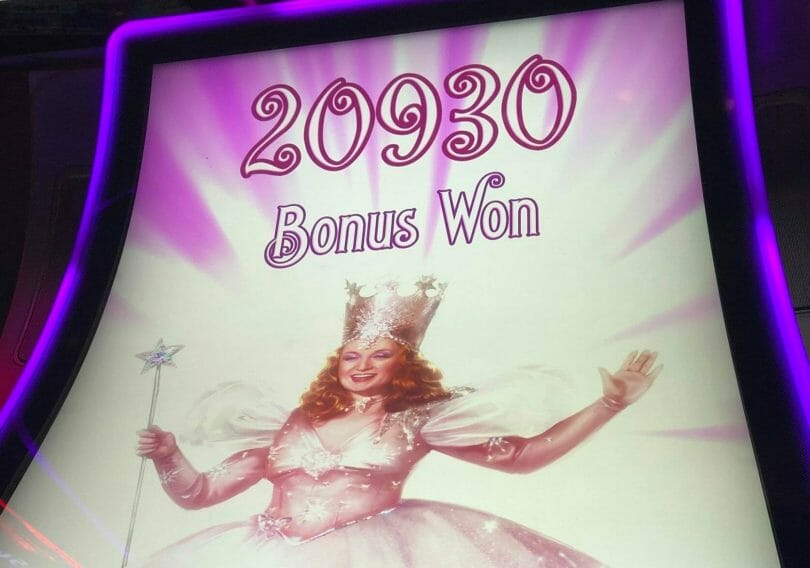 The movie The Wizard of Oz has led to a very lengthy series of slot machines, originally produced by WMS and now continued into their new parent company, Scientific Games.

The games still follow a WMS-centric format, featuring more/better bonus bets, expanding reels features and so forth, but adding some creative new aspects to the free spins bonus.

The base game is straightforward, with 10 base pay symbols, a wild lollipop symbol, a Jackpot version of the Ruby Slippers symbol which effectively works in tandem with the original, and the bonus symbol.

Lollipop wild symbols can appear on reel 5, and if you get a 5 of a kind, the lollipop will spin between two prizes and award one along with the line hit.

If you get five of a kind of the jackpot Ruby Slippers symbol, you win the There’s No Place Like Home progressive at max bet, or 100,000 credits times your line bet for any other bet level.

Then rows of wild reels will fly by, similar to games like Wonka (and effectively acting like the Glinda wild reels bonus on earlier games). The average number of reels replaced with wild reels is increased with the more/better bet.

The bonus symbol and ruby slipper symbols are removed, taking out blockers and improving the chances for line hits in the process, since more wilds reels can lead to some easier winning combinations.

If at least one of them is a wild reel with a tornado and house on it, those reels will converted to a series of lollipop wild spaces, which then will award credits. There are dozens of potential prize pairs that can fall on the more colorful lollipops, whereas the more basic ones will have a smaller prize.

The lollipops further amp up the potential payouts since you get line hits and the lollipop prizes in a single go, which adds the overall payout potential of a given Witch Bonus.

The Witch Bonus features a Bonus Guarantee of 250 credits x your bet multiplier, should you not get a house/tornado symbol, which awards prizes on the lollipops.

Three or more bonus symbols trigger the Munchkin Parade bonus. You get 10x your bet for four and 50x your bet for five, but regardless of the trigger, you start with a wheel.

The wheel can award spins or one of the four progressives. Should it award a progressive, you get another wheel spin. Once you hit spins, you begin the bonus.

The unique nature of this bonus is that each spin, a bonus upgrade is selected and activated for a few spins. It can be:

At the start of the bonus, you can have up to three spaces, each with an upgrade. Each spin, a new upgrade is added, and if all your upgrade spaces are full the oldest one drops off.

However, there’s the ability to get Toto once in the bonus, starting after the third spin, which acts as a retrigger and awards extra spins, as well as a fourth upgrade space, for the remainder of the bonus. This acts like the Unicow on the newer Moolah games in that it offers more upgrades, and is a relatively rare feature to come out. But Toto is more likely with the Witch Bet.

The bonus is pretty volatile because you need the right combination of things to line up – as you can see above four reels extra munchkins, all munchkins wild and all wins 2x combined nicely here for a very strong win.

Aside from Toto, regular retriggers using the bonus symbols are also possible, and work/pay just like the initial trigger. The game features a bonus guarantee of 5x your bet on the Munchkin Parade Bonus, in case things don’t work out.

One thing unique about this game is the 3D animated munchkins on the top screen; this is a very unusual and novel thing to see on a slot machine, but shows the WMS/Scientific Games’ teams’ ability to continue to push the envelope graphically on games like this, and ensure it stands out as unique on the gaming floor.

Despite Munchkinland being out for awhile as a premium game, the machines remain popular on the casino floor, and one of my home casinos recently added more of them.

While the game can be patchy in terms of features and bonuses, it is usually sufficiently active to keep things interesting.

Here is a video from RandomSlots featuring the pay tables and bonuses:

Here is Slotlady having a strong session on the game:

Brian Christopher gets the bonus and finds Toto in this video, starting at 6:09: