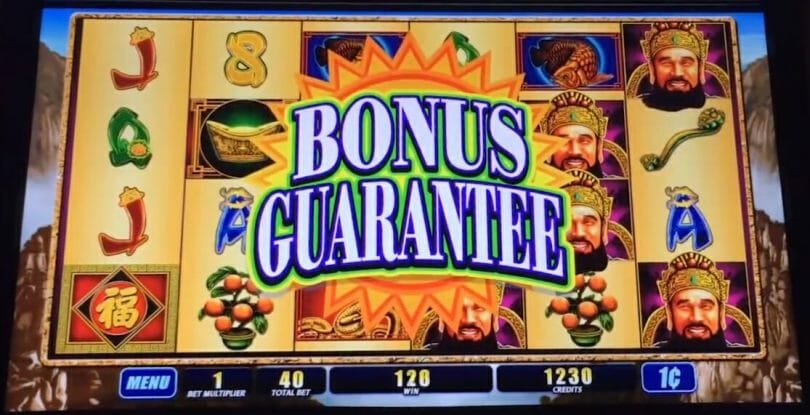 Over time, WMS had been developing more volatile slot machines. But some players would note that after fighting to finally get a bonus, a $0 outcome was possible, and common enough to be a frustrating experience. They came up with a counter to that problem by introducing the Bonus Guarantee.

The feature, which launched with the series of games linked to their Blade machine, would guarantee a win that was a certain multiple of a bet, initially either 5x or 10x, although as their games evolved it would depend on the game.

The idea was you’d get a consolation prize if the bonus failed to clear a certain amount, but players weren’t too happy with this either, as it was a bit of a poke in the eye if you didn’t get anything substantial out of the bonus. A loud bell with sound with a giant Bonus Guarantee logo as it counted out the little extra it was giving you upon the conclusion of a bad bonus.

WMS would continue to tinker with this idea, even well into the Scientific Games ownership era. On the Vacation slot machine, for instance, if you didn’t reach the minimum prize you’re guaranteed from the free spin bonus, the bonus would continue, and you had the ability to increase that minimum as a feature of the bonus. So a massive line hit could push you over the top instead of a set 5x or 10x, adding a bit of excitement to the bonus and not ending as often with a whimper.

Some of their newer games, like Zeus/Kronos Unleashed and their new cousins Athena/Medusa Unleashed, have a guarantee on the free spins. In lieu of a Bonus Guarantee on the Lightning Respin, they’re designed to be required to have some sort of payout, however minimum. The Flintstones Yabba-Dabba-Do features and the Wonka Oompa Loompa features do seem to have a bonus guarantee structure if a minimum is not hit.

Perhaps one of their best implementations of a bonus guarantee is on the 3-reel Wonka, when you get a $0 feature, the classic “You Get Nothing” line from Wonka plays and a bonus prize, the “Sweet Nothing” prize, is awarded – it’s a nice use of licensed content to play with the idea.

In the end, this is to make sure that when you get an actual feature/bonus, you will get paid for them. But one other lesson learned – they don’t slam the Bonus Guarantee logo in your face anymore; over time the logo first was shrunk, and then just became part of the tiny type that walks through the wins. It seems giving the players a few dollars instead of shouting that they were skunked in the bonus was a bit more palatable.