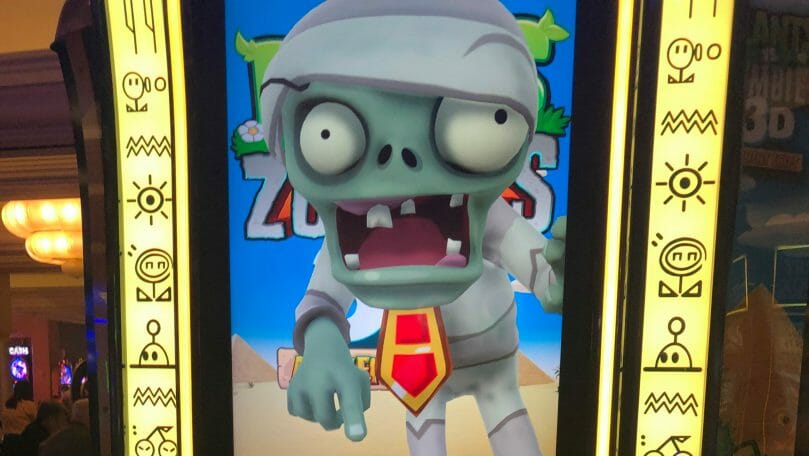 Spielo, now under the IGT umbrella, was among the earliest to produce games with persistent state reel design that could lead to Advantage Play opportunities. One of the games they produced a few years ago that still has its fans is Plants vs. Zombies 3D: Ancient Egypt.

The game is somewhat complex with its variety of bonuses, but the baseline game, and the potential advantage, is pretty easy to spot.

The reel set is a 5×4 reel set with 40 lines. The bet increments are 80 cents. One thing that sets this game apart right up front is at the $1.60 and $3.20 bet levels, the ability to trigger a bonus increases. This is unusual, but the game spells it out.

The reason for this is each bet level has a persistent state bonus meter. When you get a bonus symbol it has one or more brain symbols on it. Each brain increases the bonus meter by 54 points. However, each wager decreases it by 12 points. The number of brain symbols differs by bet level;

Bonus symbols only appear on reels 1, 3, and 5, but multiple can land (and awards brains) on a single spin. When a bonus is triggered, one of four bonuses can be triggered:

We’ll go into each in a moment.

An additional feature that takes place during base game spins is the Base Game Battle.

On any spin, 1-2 plants can be added to the left of the reel set, up to a maximum of four on the left side. Also on any spin, a plant can attack and kill up to 8 zombies, paying out credits for each killed (the type of Zombie has an impact on the amount of credits won for a kill).

If you kill an electrified Zombie, you get plant food, which goes into a second accumulator, up to 4 in all, which enhances the Zombie Uprising bonus. This accumulator, like the bonus one, is persistent to the bet only, so each bet level has its own meter.

The plants collected on the left also enhance the Zombie Uprising bonus, so having four plants on the left is certainly a help as well.

This is a complex bonus given it interlinks with the base game, as well as gains power ups from an accumulator on the base game. First off, any plants you have on the left side of the screen going into this bonus carry forward. If you have plant food, it will be used during the bonus at a maximum of one per lane.

Plant food will speed up a plant’s ability to fire at the zombies for a short period of time. Each zombie will need a set number of hits to die. If a tombstone is on a space, it will transform into a Zombie.

Each cleared Zombie offers credits; each cleared lane offers a bonus. Clear all four lanes for an additional bonus.

This is basically a randomized credit prize bonus with complex instructions and animation; because you don’t really do anything to control it, there’s a speed up button to let you watch at a faster pace what will transpire.

The payout can be quite solid given there are potentially dozens of zombies killed and four lanes to clear.

This has some similarities to the Zombie Uprising Bonus but is a bit simpler in execution.

First, you spin reels on two pyramids. One reveals what Zombies you’re trying to kill, the second reveals which Plants you have to kill them.

Then, you spin reels to see what ammunition your plants are given to wound or kill Zombies. You can spin up to 20 spins. Each hit, and each kill, awards credits. If you complete 20 spins or kill all the Zombies, you’re awarded an additional prize. So ultimately you want to kill all the Zombies or survive 20 spins.

This, too, is a randomized outcome given the spins, but is a bit more interactive since you’re controlling the spins. As such, it tends to be a bit more fun. And it can pay well also!

This is a picking bonus. A series of camel segments appear and you pick them, hoping to reveal three suns or cones before revealing three of the same colored skulls. If you pick all three segments of an individual camel, another one will move into place.

There’s a maximum of three rounds; each round the prizes go up (the third round remarkably so, given it’s not easy to get there), but the ability to move forward goes down (and of course the third round is always final no matter what).

Ideally you want to pick two of each before revealing the third that advances you, as it gives you the maximum opportunity for credits. Theoretically a perfect bonus would give you 21 selections, 7 in each of the three levels. It does appear to be a true pick bonus, as the remaining choices are revealed after a round is over.

Finally, the Free Spins Bonus is pretty straight forward. You earn 10 free games. The battle outside the reels continues in the free spins, with Pepper Pufts on the left and Zombies on the right. Now, however, instead of just credits, you can also win multipliers, additional free games, or wilds from the Zombies.

Up to seven Zombies can be killed in a spin, but that is plenty enough for a lot to happen during the free games.

The brain meter is basically what you need to eyeball here. The closer to full it is, the better the chances of a bonus being triggered with the right spin. In addition, the ability to get double and triple brain spaces on higher bets means an even easier chance if the meter is nearly full.

There’s no guarantee of a good bonus to come quickly, however, so it does differ from games where the accumulators only go up, not down. The fact that you can go some number of spins without a brain symbol, with the meter depleting each spin, can take a high advantage and make it a non-existent one pretty quickly.

Other games have the ability for an Advantage Play to not work out, but this one can simply not work out because it didn’t ultimately achieve a bonus at all.

Meanwhile, the plant food accumulator and lots of plants on the left is interesting, but since you have a higher chance of getting a bonus that doesn’t relate to it, it makes it harder to use that as a justification, especially considering the brain meter also matters in tandem with it.

If you have a machine with some combination of a high brain meter, four Plants on the left and a full brain food meter, that could yield a pretty successful Zombie Uprising Bonus… presuming that’s the bonus it gives you when you fill the meter.

Slotlady featured the game in a video:

TheBigPayback also had a solid session on the game: