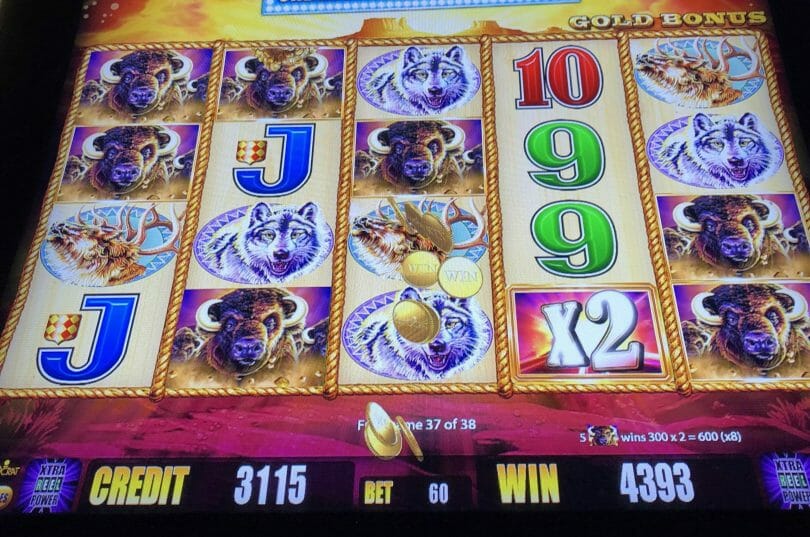 There are a variety of examples of very volatile games with volatile bonuses. The G+ Deluxe line by WMS, which also carries must hit by progressives, is notorious for having difficult bonuses that can sometimes even come in at 0, which led to their next series of games having a Bonus Guarantee feature that persists to this day on many WMS-designed games.

Many of the games rely on multipliers or stacked premium symbols to bring around the big wins, and if you don’t get them, the bonus tends to land with a thud.

Buffalo Gold is another great example of a game with a volatile bonus, but which carries a lot of weight as to your potential success. The game features multipliers in the bonus, like every Buffalo game, but you still need to line up symbols.

It also features the ability to upgrade the semi-premium animal symbols to the top Buffalo symbol, but only if you get enough gold buffalo heads. This requires a steady amount of retriggering and luck getting the gold heads.

If you line things up just right you can start to trigger some massive wins, between all the buffalo heads and multipliers, but such a scenario is rare. Not rare is an eight spin and out scenario where you only win a few times your bet. But having a good bonus can keep you in the hunt for those massive hits.

Mega Vault, with its locking multipliers, can be massive if things line up just right. But you have to get the multipliers early, and retriggers can help give you the runway you need to really get a solid payout.

As you can see, volatile base games tend to also have volatile bonuses. This isn’t always a guarantee; sometimes they give you a volatility choice, but if you find a game with a really tough bonus, chances are the game as a whole is volatile too.