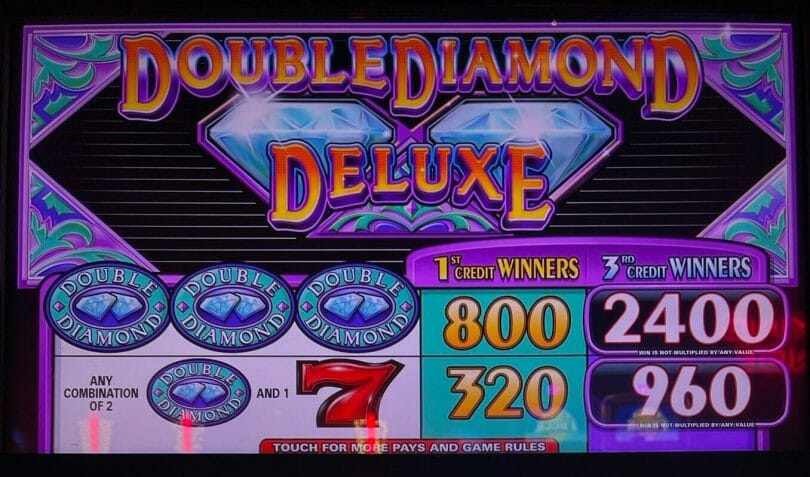 My love of the Double Diamond series has been mentioned here a few times in the past, as has my willingness to play more mechanical reel games. But I’ve been remiss in not mentioning the game that I first played in the series, and is still a fun one to seek out in casinos: Double Diamond Deluxe.

On the surface it’s got the same pay table setup as Double Diamond and the same symbols present on the reel strips. Like the original Double Diamond it also has a single pay line, with the ability to bet 1-3 credits.

You still have the Double Diamond symbol serving as a 2x multiplier and wild for any line hits (and 3 of them yield the top payout).

Also, like the original, all the pays are in the base game – there are no bonuses or features to siphon money off into areas you have to enter through bonus triggers or anything like that.

The special something for this game is the use of nudging reels, based on diamonds blended inside the bar symbols. When a bar symbol appears above the payline, with a diamond facing downward, the reel nudges down to put the bar on the payline.

Similarly a bar falling below the payline, with a diamond facing up, will nudge the reel up, again so the bar is placed on the payline.

The reels can nudge into a paying position, like the examples above; it can also nudge and have no winners at all. But the nudging adds a nice little something to the game, and it serves to slow down play just a touch.

I’ve played the machine pictured in this post a couple of times this year at a casino I’ve visited; I like it in part because the pay table is proportionally even for all bets, so at the $1 denomination I can play $1 and not worry about missing out on pays. And it is a pretty smooth ride overall – it’s definitely not an ultra volatile machine, with a top payout of just 800x in the version I played.

This is a great low rolling in high limit machine possibility, but overall the game is fun at any denomination you can afford (I’ve certainly seen quarters).

OldSchoolSlots plays a lot of mechanical reel favorites, and played Double Diamond Deluxe in this video starting at 5:33:

And now for something fun – the same YouTuber played it in this video starting at 5:17 and got the top award: