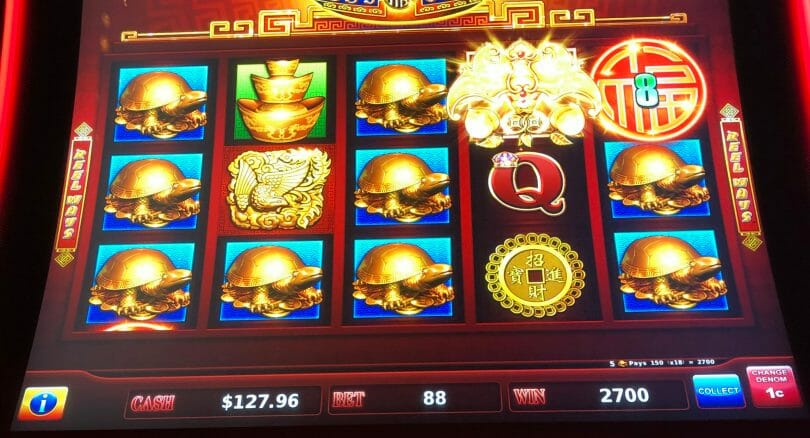 Rising Fortunes is a new sequel of the classic 88 Fortunes, which has spawned a whole genre of games. The new game uses the same structure, progressive setup and art as 88 Fortunes while offering a brand new bonus. (A companion game, Endless Treasure, is based of 5 Treasures and does so similarly, while evoking that game’s unique bonus options too.)

The new addition is gongs with credit prizes on the reels, like many of the Link games nowadays. Collecting six or more gongs triggers a bonus, and the combined value of the prizes collected is the Shou bonus, which can be applied to one of two options:

The Top Up Bonus is of course the new angle for the bonus, and it can get quite exciting when the gongs are landing. Gold gongs effectively pay the Shou bonus, like in the free games. But getting the green gong will pay you everything on the board, which if you get a few green gongs can add up quickly. If you start a top up bonus with at least 11 red symbols, the green gong will be multiplied if landed.

Free spin symbols can also appear within the first 12 spins of the Top Up bonus, which start with 6.

And like other links, you can land the grand by filling the board (although to ensure a balance, there’s also the ability to land the grand at random in the free spins as well).

One other wrinkle with the utilization of the gongs is the gold symbols bet, which I’ve talked about on the various games in this format like Dancing Drums. Betting more gold symbols unlocks better symbol pays, with each gold symbol upgrading one of the premium symbols on the reels.

But the gong prizes also increase with the gold symbols bet increments. And while it says 88 for 5 gold symbols above, occasionally an 888 credit prize can appear at 5 gold symbols, as seen in my Top Up Bonus image earlier in the article. The prizes will also be multiplied by the bet multiplier, so doing a x2 multiplier will reflect in x2 gong prizes on the reels, and so on.

If you manage to land 15 gongs at the onset of the bonus, you can win the Grand jackpot instantly, but only if you’re betting 36 credits or more. And in a major difference from previous games with the gold symbols, your gold symbol bet doesn’t have an impact on whether you are Grand eligible – you just have to wager that same 36 credits or more to be eligible for the Major or Grand on this game.

Like other Scientific Games games with similar functionality, denomination doesn’t play into the Major/Grand chances, only bet level, so an identical monetary bet on two different denominations will mean the same chances for Major or Grand. But since the Mini and Minor do change based on denomination, those odds would change accordingly.

It’s another complex one, but fun one once you get to know how it works, and I’ve had some sizable wins after a couple of rough initial outings. Like many in the series, prepare for volatility, but otherwise it’s a fun game!

And here’s Diana Evoni with a great run of Rising Fortunes bonuses: