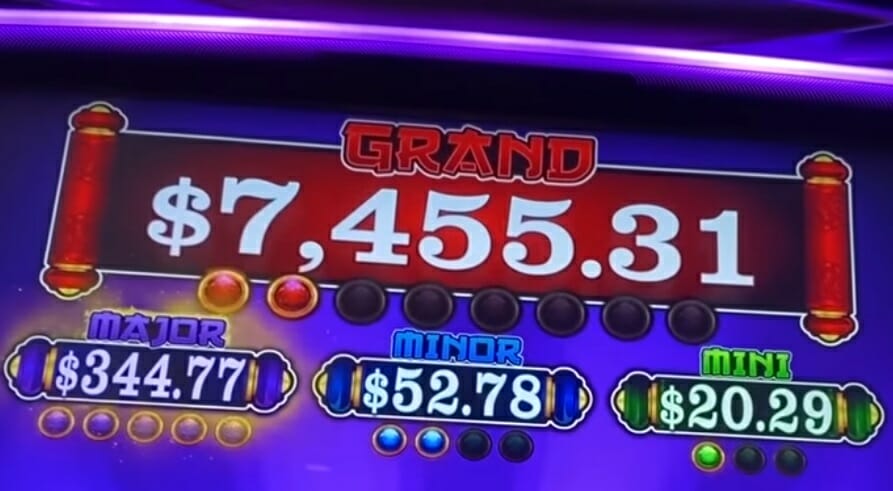 Every once in awhile, a slot game will come along without a true bonus round, like free spins. I wrote about example of this in a post last week, but a prime recent example is the Bally (owned by Scientific Games) games Rising Panda and Rising Guardian.

The game is an all ways pays scenario, starting with 1,024 ways on the base game and a 50 credit bet increments. Both games have the same structure.

In lieu of free spins or other bonus, there’s a regularly triggering feature called the Expanding Reels Feature.

If you get the premium symbol (either the Panda or the Guardian, along with wilds, which also count for this feature) to land on each of the first two spins, a row is added to the reels, and that row now spins.

If you land a symbol either on a reel that already has them locked in, or an adjacent reel, you can add another row and spin again. This can happen up to a total of four times, with a final 8×5 reel set showing, or 32,768 ways to win.

Aside from whatever pays you end up with from the feature, if any other symbols line up based on what landed, you’re paid for them as well, so you get additional secondary line pays from the feature.

The higher your total bet, the more likely you’ll trigger the Jackpot Bonus. You’re guaranteed the bonus if you get a scroll on reels 1 and 5; you have a chance of triggering it if appears on only one of those reels.

It is a true pick bonus that lets you pick for one or more progressives. The picking is weighted to make the smaller progressives be won with much higher frequency, but each picking bonus it is possible to #landthegrand.

It takes a different number of symbols found to win a given progressive:

But the number of symbols available of each type differs:

So you have to find all 8 Grands before finding 3 of the 10 Minis, 4 of the 8 Minors, etc., to win that Grand progressive. You can take a maximum of 17 picks, as mathematically by the time you reach 17 you’ll have had to have filled one of them. So the odds aren’t great, but the chance is certainly there.

This game is fun, with the feature coming often and a chance at a big progressive still lingering. And with a 50 cent bet increment on 1,024 ways, it’s not a horribly volatile game (although many Bally games aren’t anyway). It’s worth giving a go if you see it on the casino floor.

I previously featured a Brian Christopher video, which is below, showing a couple of progressive picks among the spinning he did (the first progressive pick starts at 8:35):

For those looking for a basic walkthrough of the game, including pay tables, RandomSlots comes through as usual: