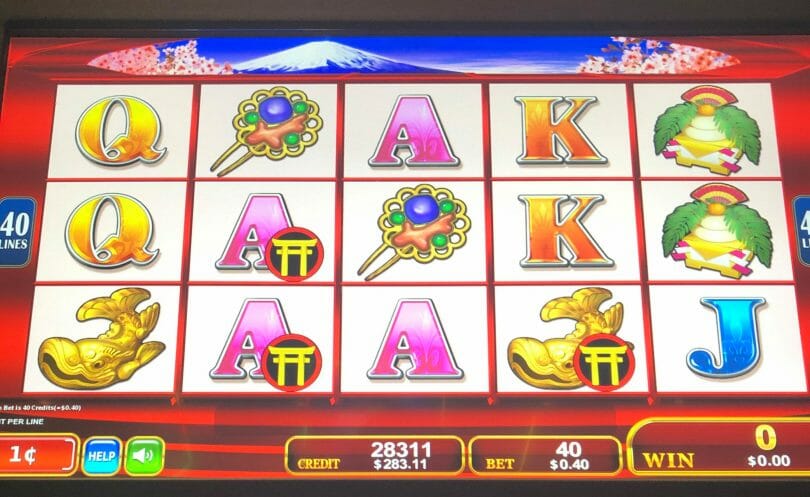 Samurai Secrets is a Konami game which follows in a tradition of many games by the company. The 1 credit per line game (the version I played featured 40 lines) features individual reels in each space (which Konami calls Multiple Lines 15 Reels) and the ability for massive win potential in the bonus round, which features sticky wilds.

The game is popular enough that it saw a reissue on newer cabinets, to ensure it maintains its place on casino floors as older cabinets are retired.

The game’s line hits are solid, and you get paid a scatter pay for two bonus symbols, which helps keep the pays flowing while you await the bonus, which is where most of the potential lies. Bonus symbols can appear on any of the 15 reels, and getting three triggers the bonus.

Wilds are accumulated during the bonus feature, as the game would put it; in more plain English, wilds you land during the bonus stick around for the remaining spins. It can be difficult to land them, but if they land early and towards the front, you can see the pays build pretty fast.

Like many Konami games, the potential is there, but the game is on the volatile side accordingly; that doesn’t mean it’s tough by any means; I’ve had my winning and losing sessions but getting a 10x or 20x base game line hit also isn’t uncommon, keeping you in the game as you hunt for bonuses or a truly big win.

Here’s a video on an older version from The Shamus of Slots: