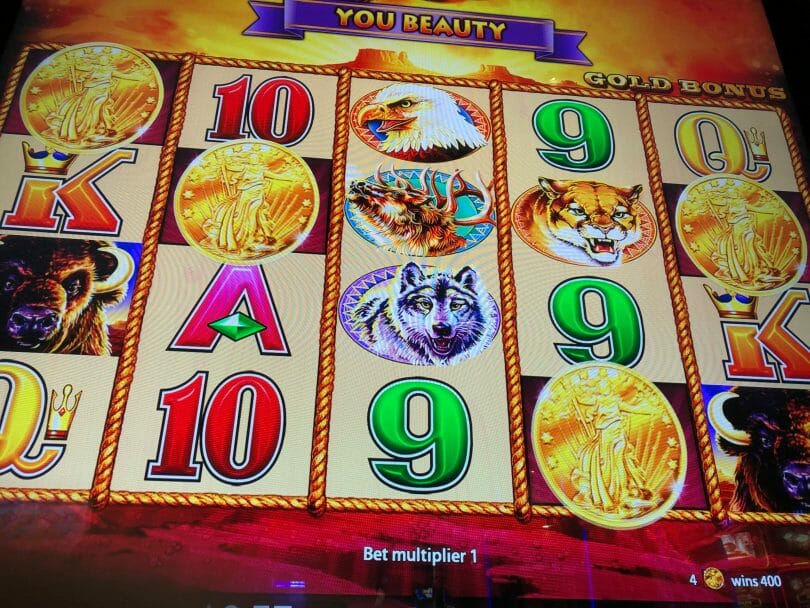 Friend of the site Elvia, who has the channel Elvia’s Slots, is one of those avid Buffalo game players, and she’s had some pretty epic wins on the series of games.

Buffalo Gold is among her favorites, and so it’s not surprising given how much she’s played it that she’s encountered some pretty unique circumstances regarding the game.

In this video, she gets what is a bit of a slot unicorn – 15 gold buffalo heads on the game. And on a 60 cent bet, she manages a more than 2000x bonus on the game, landing a jackpot handpay.

With 15 gold heads, all of the semi-premium animal symbols are swapped to be buffalo, drastically improving the chances of a big all ways pays win given the high value of Buffalo symbols, clumped in generous quantities on the reels, and the ability to get tons of 5 of a kinds.

This is one of those slot goals that tend to be on many players’ lists, both for its relative rarity and the general outcome that it yields in terms of payouts. So it’s one of the reasons why Buffalo Gold games remain popular on casino floors.

It’s also why there’s been a sequel, Buffalo Gold Revolution, and there, too, 15 heads can be lucrative. Another friend of the site, Gabor, was featured on Diana Evoni‘s channel playing with another player and managing 15 gold heads and a jackpot on a 75 cent bet.

As you can see, retriggers are also your friend here, and they got a ton of spins, racking up wins along the way. And it’s a reminder that you don’t necessarily need to be betting a lot to get a handpay, although the relative odds of doing such a thing are lower betting lower.