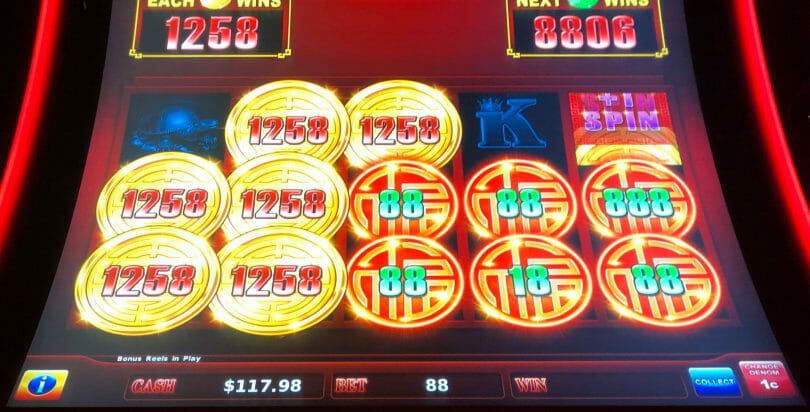 While many games, particularly wide area progressives, have a floor at which you must wager to be eligible (Megabucks requires a $3 bet, and Monopoly Money Grab is among the games that require a minimum bet level to qualify), there are games where you can land the grand on much smaller bets, or on any bet.

One such game is Endless Treasure – with the standard for this series 88 cent bet, you qualify for all the progressives, including when the pot closes. While the most likely outcome will be the Mini, you do have a chance to win the Major or Grand jackpots.

That was exactly what happened when The Slot Cats was playing Endless Treasure, which features an enhanced Major and Grand progressive jackpot compared to the standard Duo Fu Duo Cai games from which this derives (although it’s part of its own series, Jin Ji Bao Xi).

On an 88 cent bet, Heidi managed to win the Major progressive, with a fantastic jackpot that has to be seen to be believed!

This isn’t even their first sizable Major jackpot! Heidi spent hours chasing a bit Major jackpot on Piggy Bankin‘, also on largely smaller bets, and got a hugely inflated major jackpot. (It’s also no coincidence that she said she had to call Fred both times…)

So there you have it – do you need to bet big to win big? No, as long as you pick the right games, and of course have luck on your side.