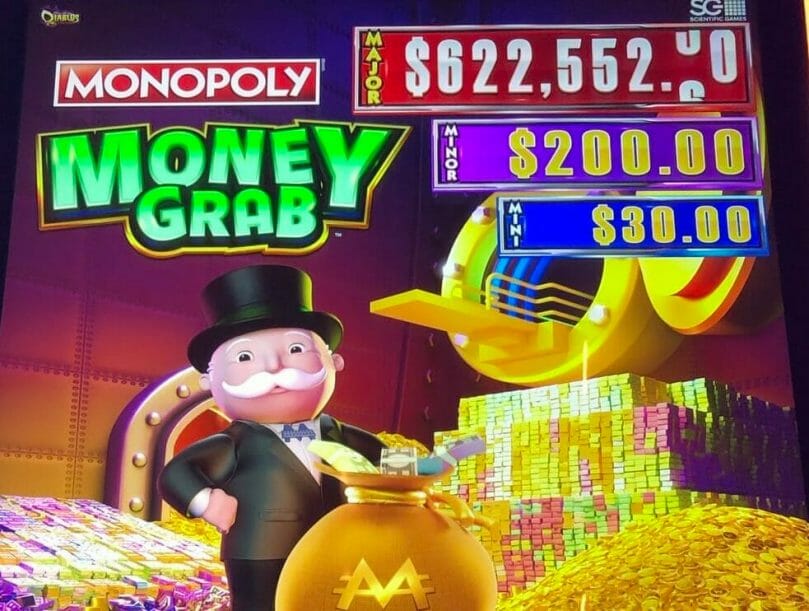 The popular Monopoly series of slots continues to iterate and evolve. The latest addition to the series, Monopoly Money Grab, integrates a feature popular in the Jinse Dao series of games, Hit & Win, while having some features of its own.

The game features a wide area progressive, which is activated as long as you’re betting enough. One nice thing about this game is it comes with a variety of denominations and bet levels, so it’s accessible to players of just about any bet level, since you can do 75 credits on penny denomination, for instance. 25 lines are in play on the penny denomination.

The Hit & Win feature on this game works a bit differently in that you do not need to collect prizes in successive reels to win what’s shown – if they land anywhere on the reels they’re yours to keep. As an added twist, Mr. Monopoly can also throw some prize symbols out on the reels after the suspense spin ends and show you what lands naturally.

The prizes are color coded with blue being smaller, with green bigger than that, and yellow above that, playing off the Monopoly money colors, a nice touch.

If a full reel lands with wild symbols, it sends a bill up into the money bag above the reels, which can explode anytime that happens and trigger the Money Grab feature. Mr. Monopoly fires money up into the air, which the bag catches, and reveals your prize. I got a 5x win on the single time that happened during my play, but bigger prizes are certainly available.

Here is a video from Scientific Games from G2E 2019, which introduced the game:

Here is Slotlady playing a session of the game, including back to back bonuses and includes a Hit & Win Free Games:

Slotaholic had an early video out of the game, and featured the other Free Games format, the Wild Free Games:

And here’s a strong session from The Slot Cats: