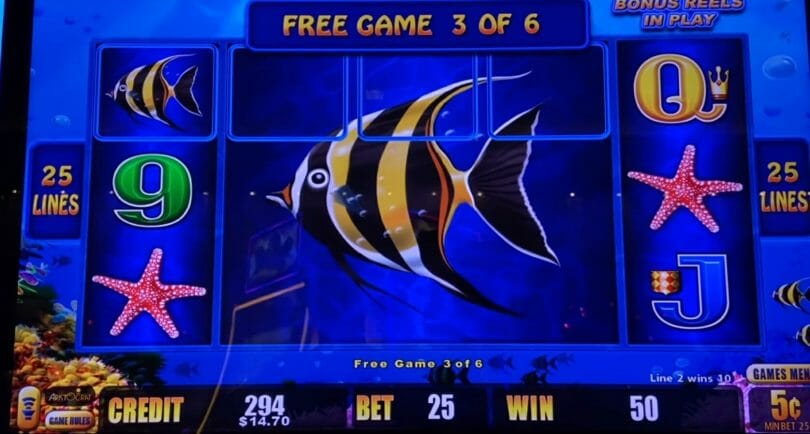 Sometimes, slot machines have rare scenarios that are above/beyond the expected. These unexpected situations will add depth to a game by allowing for some exciting situations most never see. This could be something like a random major/grand on a game like Lightning Link.

But Lightning Link has more surprises up its sleeve than just those random events. It has two bonus types on each game – a hold and spin, when you land six numbers on the reels, and three bonus symbols for free games.

But what many don’t realize is it’s entirely possible for a person to get two bonuses on a single spin. Indeed, there are multiple game types that do this, but on Lightning Link it’s particularly rare.

That’s exactly what happened for Slot Queen, when she was making (at that time for her) a mighty $5 per spin swing on Lightning Link Magic Pearl. In that situation, the game begins by playing out the hold and spin, before moving on to the free spins bonus.

Given she had two bonuses out of a single spin, it wasn’t the most outstanding outcome, but still was quite healthy. But keep in mind that although she was betting $5 a spin, this scenario could happen at any bet level – it’s just really hard to manage to accomplish.

I struggle to get a single bonus on these games, let alone two at once, so it’s a remarkable thing to capture on video two bonuses in one spin. Have you managed to make this happen yourself? I’d love to hear about it in the comments.