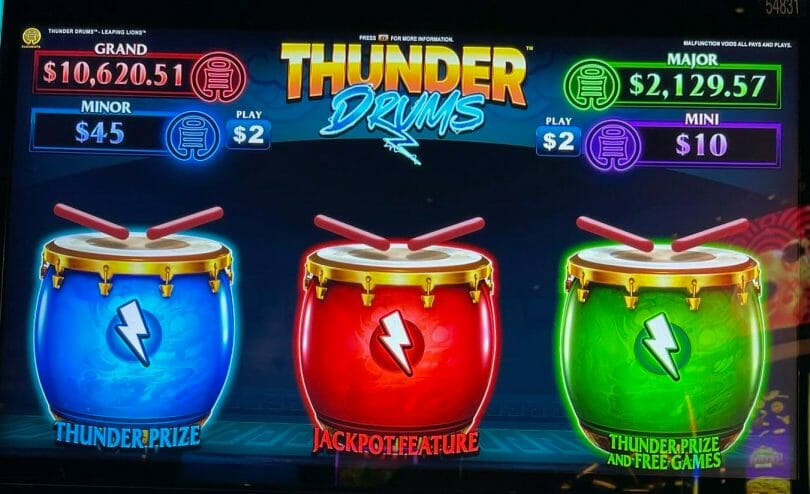 Three pot/bag games continue to proliferate and players continue to eat them up. One I saw on a recent trip was called Thunder Drums by Light & Wonder, which is part of their Elements series (along with Coin Combo and Ta-Da Panda).

Like other games in the series it’s an all ways pays game but it’s set up in 50 credit increments, which can make the game more accessible to lower betters than others like it.

So that leads us to today’s Slot Moment, which features Slot Queen devoting a video to this new game series.

It took awhile for Slot Queen to get a bonus, in which she got the red drum to go off and deliver the Jackpot feature. It’s a picking feature and yields one of the four progressives or bonus prizes.

A few spins later, she got the blue drum to awards the Thunder Prize, where it adds up the lightning bolts that are on the screen with prizes, and then bangs the drum to grow the prize further. That one worked out better than the Mini bonus, but it was still a 7x prize.

After 23 minutes, she kept playing but turned the camera off, and she ended up picking for the Major progressive!

The structure of these progressives nowadays means the Major is generally one of those progressives that can deliver a handpay if it’s been built up enough, and that’s exactly what the scenario was here.

After that, she showcases additional footage showing an example of the final drum, the green drum, which has a Thunder Prize and Free Games combination. This bonus works just like Ta-Da Panda – the Thunder Prize is the repeating prize if you land, in this case, a drum, and the drum also serves as a while. Getting a drum resets your spins remaining counter to three, leading to a potentially open-ended bonus.

If you want to get to know this game and how it works, or just enjoy a nice unexpected handpay, this video’s for you.