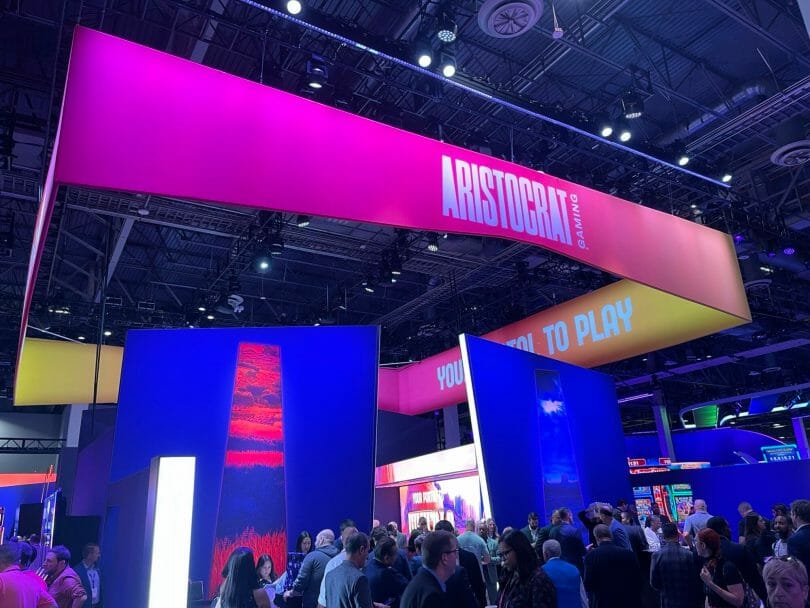 Aristocrat is usually a booth to watch, as they tend to roll out some pretty unique stuff. Many of their game formats are often mimicked or played with by other manufacturers, for better or worse. This year saw a lot of scenarios that evolve upon existing themes or mechanics, which is good news for fans of their various slots.

I was able to participate in an influencer event this year, where we were able to walk the floor as a group and get a tour of some of Aristocrat’s most exciting new games, and get a bit of a feel for how they’ll work.

Aristocrat did not allow any video filming of game play to be released in real time after G2E, instead asking for those clips to be held for when the games are released, so I’m not embedding video in this article accordingly. However, I have been given permission to incorporate images shot at G2E, so you can get a glimpse of the games covered below.

The combination of Buffalo and Lightning Link with Buffalo Link was a slam dunk for Aristocrat, so it’s not surprising they’re following it up with another game. And indeed that was what we saw with Lightning Buffalo Link.

This one takes an aspect of Dollar Storm, the over the top Wide Area Progressive, and carries it into this series. However, instead of a Super Grand chance as a hold and spin possibility, the Grand is upgraded during the free games. It will make it a difficult one to get for sure, but it’s a nice way to extend that opportunity into this game line.

The game retains many aspects of what preceded it, including the multi-denomination structure, the true persistence counters on each bet level that must hit by 1800 buffalo heads collected, and so on.

Tarzan: Palace of Diamonds and City of Gold

Tarzan, a popular theme for Aristocrat, continues forward with a new pair of games that incorporates the four-prize structure that Aristocrat has made popular on games like Lightning Link, but added a few new twists here.

The games have enhanced bonuses based on how you trigger the bonus, which can really open up the payouts if you get lots of wild reels during the bonus. Of course, the more present those wilds are, the stronger the bonuses will be, so there’s a bit of a chase element to getting those better bonuses in there.

The Cash Express Luxury Line games were another popular hit for Aristocrat, yielding other mash-ups of core themes with extra elements like Jackpot Carnival, a write-up of which will be coming soon.

However, Cash Express has been a popular element of Aristocrat games for years as well, and Cash Express Mega Line takes it to the next level with a Wonder 4-type arrangement with four reel sets where you can choose from four themes: Buffalo, 50 Lions, Timber Wolf and Pompeii.

The cash on reels and train feature can come out across the four reel sets, which is where the game can get interesting, and ups the potential, just like any Wonder 4 scenario.

One nice thing is Super Free Games (with four reel sets) are automatically awarded whenever you get a bonus, so it’s not something that has to happen specifically, or that you potentially upgrade to such as on the Wonder 4 Boost series.

Buffalo Gold remains one of Aristocrat’s most successful brand extensions, yielding its own sequels such as Buffalo Gold Max Power and Buffalo Gold Revolution.

The latest to come down the pike is Buffalo Gold Wheels of Reward, which add three wheels which each can upgrade the scenario going on:

This game appealed to me for a few reasons – this has all sorts of clever player nods in my mind that can yield some really exciting moments.

For instance, it has a wheel feature that, based on the number of heart symbols landed when you trigger it, eliminate the lowest value wheel wedges, basically improving your overall payout opportunity.

Similarly, while this has a progressive pick scenario like many other games, this is a true pick model, meaning the player’s choice is not predetermined. They handled it really well, with credit prizes, progressive opportunities, and additional picks when you pick the best ones, which can aid your chances just a bit of getting where you need to to get that big progressive.

Just like the wheel pick, the number of hearts you get on the trigger determines how many picks you get to start. So the right triggering opportunity can really improve your chances.

The way both of these are structured are awesome, and creates a great chase moment for those high-quality trigger opportunities where things can get really exciting.

Other Games Seen on Display

I didn’t get as much time to poke around these, but saw these also on display in the booth.

This is Aristocrat’s swing at a frenzy mode, which initiates a timer and shifts the goals of the game you’re playing. Landing a Buffalo Strike symbol in the frenzy mode triggers a top screen feature where you can win credits or a progressive.There’s also the chance for a stampede for an array of prizes.

The bonus looked to have the ability to unlock multiple reel sets as you collect via a counter buffalo heads. It’s sort of a new twist on Buffalo Gold, since you don’t have to get gold heads specifically, but still has that bigger potential as you unlock more reel sets.

The success of both Buffalo Gold Revolution and Buffalo Chief has encouraged Aristocrat to take those basic formats and carry them out to other themes. Timber Wolf tends to get the treatment, as it does with Timber Wolf Gold, given that theme’s popularity and similarity to Buffalo in some ways.

The thing I like about Aristocrat’s approach to both is that they are similar, but not identical. For instance, you can see on Timber Wolf Gold the credit prizes have been replaced by wedges offering additional free games, which adds a nice twist there.

Timber Wolf Chief had upgrade symbols that stated how many heads you would get, instead of spinning a wheel to determine it. But fans of the Buffalo versions will find the parallels and plenty to enjoy.

The wrinkle is when cash on reels prizes falls where the mummy is sitting, you’re awarded them. So a bigger mummy means more chances to collect prizes. When the mummy grows, you also get a couple more spins to keep things going and collect more prizes, so as the bonus evolves the potential grows.

Overall, there was quite a lot on display that should keep Aristocrat fans engaged for the coming year. There’s also some interesting new directions with the games that still fit the overall feel for Aristocrat, something they do very well over time and should lead to new popular games on the casino floor in a year’s time.