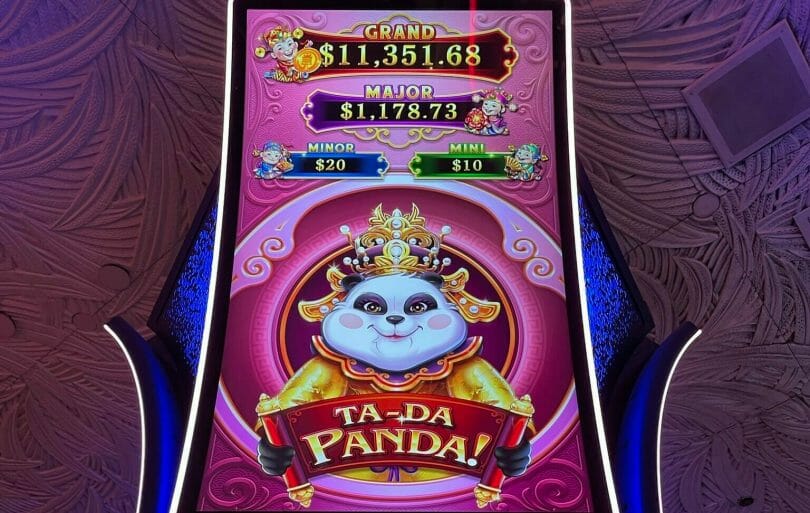 The Shuffle Master division of what is now called Light and Wonder (formerly Scientific Games) has had a long legacy of pot-closing games that goes back to 88 Fortunes.

One of the latest in the Elements series (which includes Coin Combo) is Ta-Da Panda, a game I played for the first time on my most recent Vegas trip, and quickly became a favorite of the trip.

The game features all the standard bearing elements of games in this series, with a few twists that feels like it helps balances things out a bit.

For one, it’s an all ways pays game with stacked symbols that can lead to pretty big line hits when the right conditions allow. An above example showcases a 40x line hit, above average for any game. The lantern is heavily populated on the reels and delivers a lot of 5x-10x wins when they come out heavily, which is part of what keeps the game moving.

One thing that’s different is that the line bet increments are not even amounts. I’ve seen this on Aristocrat games like Buffalo Chief, but not on a Light and Wonder game before. Presumably this means there’s more money for the bonuses.

The big changes come on the pot close predetermined progressive pick and the free spins.

The panda wild symbol is as always what can trigger the pot closure. Like Coin Combo, the field of choices has been bumped to 15 choices; the additional three (beyond the 12 coins that represent the four jackpot options) are for boosting the prizes. The mini and minor increase by the same amount as they start (so a $20 prize would become $40, and if boosted again $60) while the major will increase by 100,000 credits ($1,000 at penny denomination) and the grand by 1,000,000 credits ($10,000 at penny denomination).

The boosted flat prizes make them proportionally more important often times than on games like Dancing Drums, and the pot during my various sessions seemed to close with more frequency, even on my lower bets of 80 cents and $1.80.

The free spins is triggered when five or more coins with cash on reels prizes appears. Those are collected and are the prize awarded each time a wild panda appears on the reels. The twist is you start with three spins, and link style reset the counter to three when you land a wild panda.

If for some reason you do not land a wild panda within the three spins, you’re given a choice of a reel spin (a wheel with various cash prizes of 5x-20x the amount you collected from the coins at the start) or the ability to reset the counter back to three to try for pandas. You also get paid the coin collection amount as a trigger, so you never go home empty handed.

The amount you collect on the coins has a pretty large impact on how good the bonus will be. As you can see on the first bonus image above, with 14 spins I struggled to get past 25x, whereas the second bonus with a much higher prize I blew that away on just nine spins.

And indeed here’s where you can find some of the money from the odd bet panel increments – the prizes on the coins increase more quickly at higher bets, so that’s where you’ll find much of the payouts for betting up.

I found this game fun to play and kept my attention. I’m a bit concerned that being on a premium cabinet (this is on their super tall new machine) it may not have a long life at the casino unless they scale it down for regular machines so it can stick around. And I hope they do that, as the game was fun and one I began to seek out more as the trip went on.

It feels more balanced as a whole than many games in this genre – across a half dozen sessions or so I never had a round without a bonus or a pot close, and usually both (and many times multiple of one or the other). I got the pot to close much more often than I traditionally do on games like 88 Fortunes. So this will definitely be one I play more as I had some good fun on it!

VegasLowRoller did a full video on the game:

TheBigPayback had a strong win on the game:

The Slot Cats played the game as well and had a bonus: