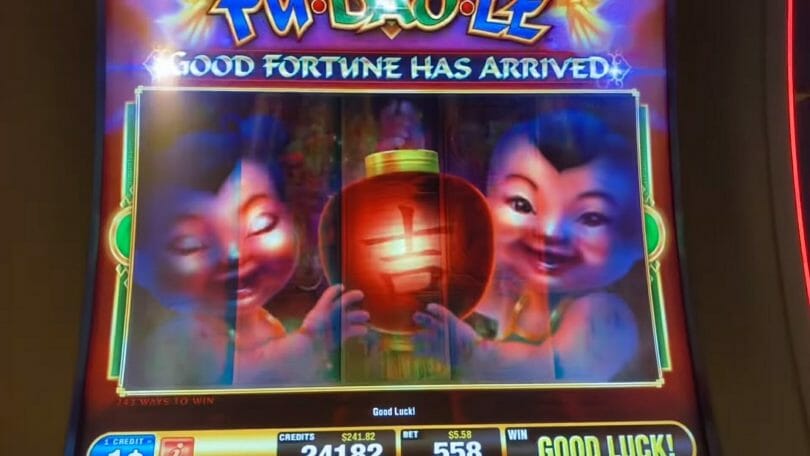 The game Fu Dao Le has been a consistently popular one on the casino floor, and sequels have followed accordingly. One of the more recent sequels is one that leverages the four reel set Reel Boost mechanic, which has a bonus that features additional reel sets as you collect stars, opening up the ability for more pays and additional spins.

Josh of Slotaholic was playing it along with his husband Joseph and each of them was having some luck. We begin the video with Joseph and a bonus that yielded a bit over 20x his bet, not particularly exciting. However, Josh then managed to one up that pretty successfully.

The babies came out, predicting something good would happen, and he entered the progressive pick, which like Fu Dao Le shows 15 coins to pick from in a predetermined, or scripted, bonus. Joseph predicted at least the minor, and ultimately Josh got the major, which at the moment was won was over $1,300, good for a handpay!

After Josh’s handpay, gameplay continued on the game, with Joseph getting a bonus while Josh’s machine was still counting up on his major progressive win, and got a bigger bonus the second time around, more than 60x his wager.

Then Josh triggered another bonus while awaiting his handpay to be paid out. After it was counted out, he proceeded to get a more than 50x bonus of his own. More live play followed, with progressive picking and bonuses, showing more of how this game plays out!

This showcases the potential of the game; the $8.88 bet may be out of reach for some, but the potential is there for some sizable wins!