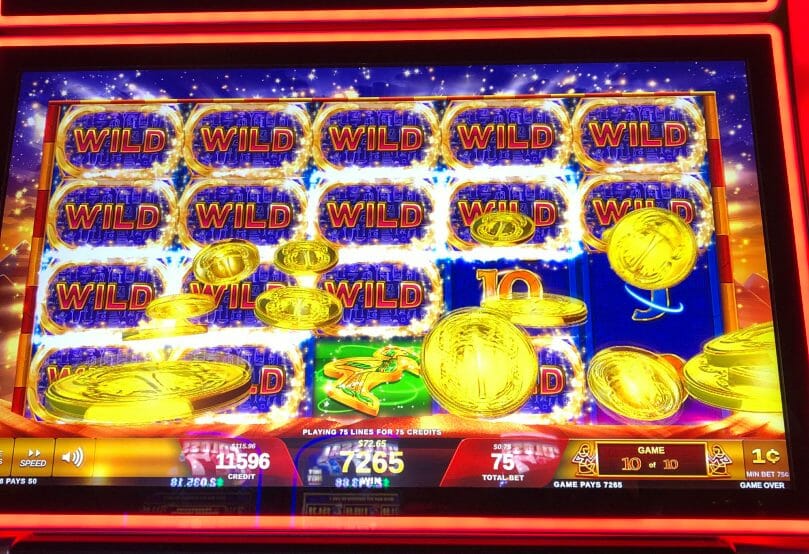 Understanding which slots are volatile can seem like an impossible task, just by looking around the casino floor. Seemingly games that look similar in terms of graphics, symbols, etc. can be very different in gameplay style and, therefore, the volatility and how they pay out in the short term.

That said, there are some giveaways that can help indicate a slot is more or less volatile. Sometimes it’s the traits of how they are designed, sometimes it’s a studio known for a certain type of game. We’ll share our thoughts in this post.

Traits of a More Volatile Game

There are a number of ways you can potentially spot a more volatile game in its natural habitat (the casino floor):

Many games will use some of these features in combination. Take Mega Vault, a popular and incredibly volatile game by IGT, who doesn’t tend to make games that volatile that often. The combination of all ways pays, the ability for symbols to clump in reels for bigger line pays, and the ability to land multipliers make big wins astronomical, but to offer that there’s a ton of dead spins.

As far as manufacturers, Konami, Aristocrat and Shuffle Master are brands that tend to have pretty volatile machines as a rule. Seeing their logo should be a sign that a game could be tough at times. WMS also has historically had some pretty volatile games, although generally speaking a bit less so, and certain of their lines, like Colossal Reels, even less so, as we’ll explain shortly.

Signs of a Less Volatile Game

You can also look for some of these features as signs a game may be less volatile.

WMS’ Colossal Reels puts some of these techniques into practice – 100 lines, so plenty of lines to hit something, but a 50 credit minimum bet – every 2 lines is 1 credit. So you can get a lot of line hits without getting big payouts much of the time, but it evens the game out. A similar concept on a smaller scale is their Money Burst series, but with less overall lines it tends to be more volatile.

Manufacturers who have a tradition of generally less volatile games include Bally, Gimmie Games (with Mighty Cash being a big exception), IGT (particularly many of their classic games), High 5 Games’ designed games (which have been distributed by multiple companies, including Bally and IGT). If you see a game trumpeting a big win with 10x your bet, you can venture that it’s designed by a manufacturer that tends to favor lower volatility designs.

Do you prefer low volatility or high volatility slots? Share your favorites in the comments!