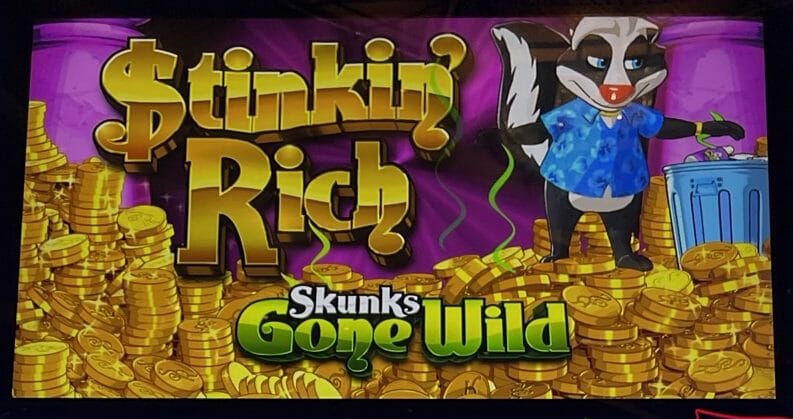 Given the enduring popularity of Stinkin’ Rich and its clones over the years, it’s a bit of a surprise IGT hasn’t tapped the game for sequels more than it has. But with Stinkin’ Rich Skunks Gone Wild, they’ve developed a successor that’s worthy of the brand, without tinkering too much with what made the original successful.

The original game had 100 lines and in most cases (depending on casino configuration) let you decide how many lines you wanted to play. This version gives you a few choices, either 50, 75 or 100, and adds a Gold Bet for 25 additional credits that activates progressives and random wilds.

It is effectively a more/better bet even thought the reel set is different on this game vs. its predecessor. The original had an unusual 5-5-3-5-5 reel set, whereas this is a more simplified 5×5 reel set.

The second is that it can add up to 15 wilds through a Random Wild Feature, which is available both in the base game and free games, effectively amplifying the possibility to fill the middle three reels with wilds to begin with. It can add the wilds either before or after the reels come to a stop, and tends to provide some of the healthier pays when playing the game.

This is in part because of the pay table being more traditional, with five of a kinds paying well and four of a kinds decently enough, meaning good wilds placement and the right symbols on reels 1 and 5 can pay out quite well. The Random Wilds feature is only eligible to come out if one of the two bonuses don’t land that spin.

The first, Keys to Riches, is the free spins bonus, just like the original. This time, however, they don’t have to be on a specific line to win. As long as one symbol appears on each of the first three reels, you get the bonus, with three free spins awarded for each symbol that lands, meaning you can get anywhere from 9 to 45 free spins on each trigger or retrigger.

The second bonus, Trash for Cash, is still a picking bonus, but now is picking to either grow or award one or both of two jackpots. With each pick you can escalate the Stinkin’ Meter, the Rich Meter, boost all the prizes available on one meter or the other, or win one or both jackpots.

The jackpot values and escalations are based on your line bet (higher line bet multipliers will also multiply those jackpots, just like the progressive).

This game keeps what makes it special, while extending the game in new directions. The game keeps stronger five of a kinds in place to ensure some line hit potential, while incorporating some random wild features to take advantage of that opportunity. It’s worth a try, and isn’t particularly volatile, which will make those who search those opportunities happy.

Here is a video from TheBigPayback which features all of the features:

Slotaholic played the game and saw the free games come out:

Finally, here’s a video from VegasLowRoller on the game which started out tough but came back to save the day: