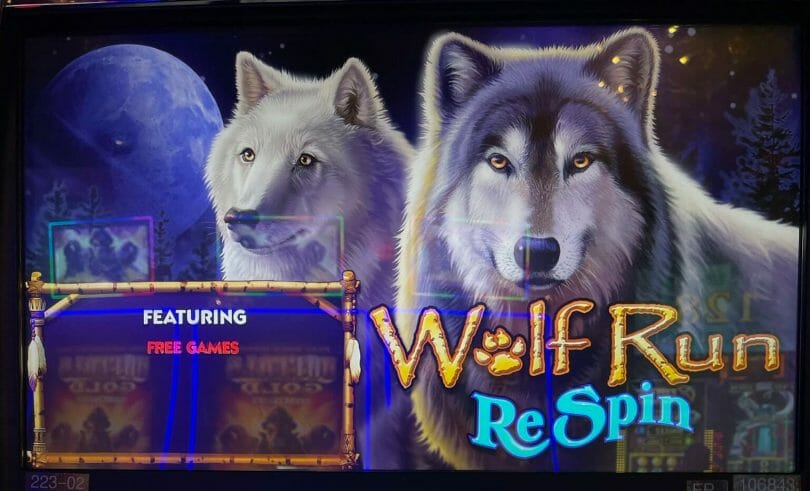 Wolf Run is a classic theme that has been seeing an increasing number of brand extensions of late, such as Wolf Run Gold. Respin features have been a common thread among them, and the latest, Wolf Run Respin, continues in that progression.

This version, unlike the others, is on a three mechanical reel format. Many slot manufacturers have been doing this with some of their popular themes, such as Dancing Drums Reels and Buffalo Gold, and so it’s not surprising to see IGT do this as well.

This version is a 50 credit game with 20 lines. Despite that scenario, it didn’t feel particularly volatile, and that’s likely because of the way the features are structured.

The game features the familiar sounds and graphics from the Wolf Run series, and the stacks of wild wolf symbols the game is known for. However, there’s also a special reel-high wild wolf on reel 2.

If landed, once the original spin is paid, the first and third reels will respin with reel 2 locked in place. This time out, a multiplier will appear on the screen above the reels, indicating a 2-5x multiplier will be awarded for whatever win is captured on the respin.

The pays tended to be pretty good for these spins/respins, awarding decent sized prizes similar to when you’d get a bunch of wilds on Wolf Run the original. So despite losing two reels and a full row compared to the 5×4 reel set of the original series, the game can still deliver those somewhat regular payouts, although overall the game isn’t particularly tough.

There’s also a free games bonus when you get the three bonus symbols, one on each reel, anywhere on the reels. I had one bonus and it wasn’t much to write home about, but added in with the respins and other things going on with the game, it still delivered a decent overall session.

Despite some efforts to dig, I haven’t found any videos on this game just yet, but will continue to look for them. In the meantime, here’s a bit more information on the game (emphasis on bit – it’s sparse there too) from IGT.