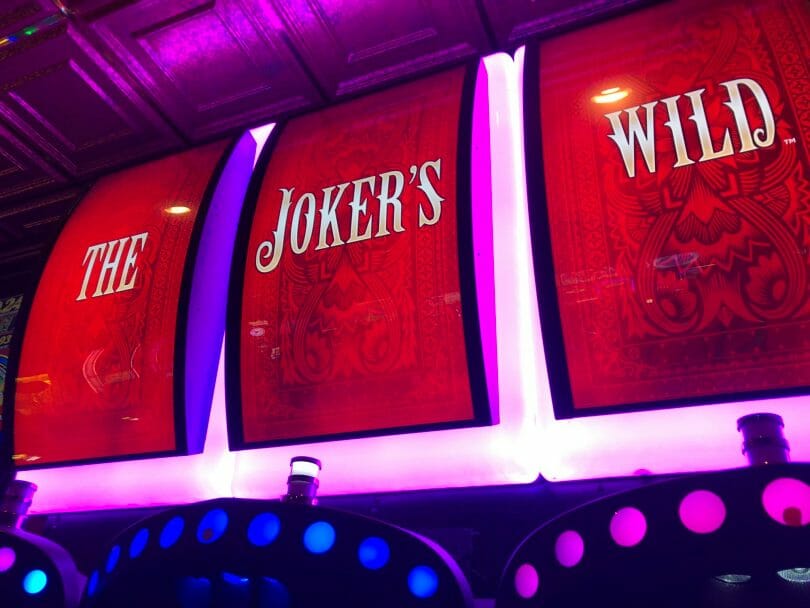 I’ve always had a soft spot for game shows, and I tend to enjoy slot machines that bring the game successfully over, so I was excited to have a chance to give Everi’s The Joker’s Wild slot a spin.

Although I didn’t get a chance to experience all the features (I’ve included video examples of them all though at the end, I highly enjoyed what I played overall, and give Everi credit for their translation of the game into an entertaining slot machine.

Of course it doesn’t hurt when you’ve got source material as strong as Snoop Dogg, who tends to be an entertaining force, but theming isn’t enough to carry a game forward.

Let’s start with a look at the bet panel. As I’ve mentioned in the past, slot manufacturers will use various methods on licensed games to increase the overall coin-in. In this case, the unlocking of the spinning symbol is the method.

You can bet as low as 50 credits to play, but to unlock the spinning symbols on all five reels, you need to wager $2.50, and at $5 you become jackpot eligible. I do like having an interim step of unlocking some, but not all, features at a mid-level bet, so it makes it more accessible in that middle range.

The spinning symbol is important, as that’s where you not only get access to credit prizes, but the bonus games. But we’ll get to that in a second.

The wilds are stacked and will move to fill the reel when landed, which is a cool feature of the game. The game features a lot of stacked symbols, actually, which can combine with the wilds nicely.

The game leans into the 420 number quite a bit, as it should for a game with Snoop Dogg as the celebrity.

Now, back to those bonuses. There’s two bonuses that can come up on the spinning reels.

The first bonus is inspired and derived from the bonus round of the actual game show, where the player tries to beat the devil. The general theme is the same as the show – credits are good, jokers are great, and devils are bad.

The game makes clever use of the three reels above the slots to play out the bonus game. When a credit prize shows up, you win it. When a joker shows up, it increases the multiplier for that reel by 1x. When the devil appears, he takes the reel out of play for the remainder of the game. Get a devil on all three reels and the bonus is over.

The graphics and impact of this bonus is pretty amazing, and Everi should be commended for using this format so beautifully – it pulls so nicely from the theme of the game and just looks amazing when it plays out above your slot machine.

The other bonus, which I didn’t get in my play on the machine, is a picking bonus with 30 options that collect in four various groups, each card you collect in the group increases the prize per card collected.

Jokers help increase the prize for all four groups by raising the value per card, but does not count towards the amount collected. So in that sense they are still helpful in growing the bonus. Three devil cards, similar to Beat the Devil, and your bonus is over.

I’ve talked about Everi and its picking bonuses before; the game reveals the other picks and there’s only three outs for the whole bonus, yet I’ve never seen anyone get more than about halfway through.

Watching the bonuses of the videos embedded below, their bonuses ended (SPOILER ALERT) on their 15th, 12th, 7th, 9th, 11th, 16th, 13th, 15th and 10th picks. In every case they had to select three devils out of 30 options to end the bonus; despite that not one got into the final third, which mathematically is unlikely.

I’m pretty confident this, like Smokin’ Hot Stuff Wicked Wheel, is a predetermined bonus. If it wasn’t, I would expect there to be more outs than three on a grid this big to ensure it was difficult, but not impossible, to pick to the end (think Jackpot Party and those style games). The reveal, then, is just to illustrate the items not picked, not where you should have picked (which goes against the conventional wisdom that reveals indicate a true pick bonus).

I don’t have an issue with predetermined bonuses, but I wish Everi would follow the lead of virtually everyone else and simply not show a reveal for the unpicked options. Explain the possibilities in the pay table or something, but keep that tradition intact – we won’t beat you up for having a predetermined bonus, I promise.

Here is a video from TheBigPayback that shows all the features of the game (and as an added bonus you’ll see a bonus on an old school three-reel The Joker’s Wild as a fun throwback at the end of his video):

Here is the session from The Slot Cats on the game: